Surampud, Reddy, Mazher, and Sankuru: A clinico pathological profile of dengue fever in children in urban areas of Telangana

Background: Dengue is a common disease in this part of the world. It is one of the dreaded fevers for the paediatric age group. The disease has various presentations and features, but early diagnosis and management can decrease mortality rate significantly.

Aims: To evaluate the clinical profile of dengue infection in children under the age of 14 in urban areas of Telangana. The study is done in the tertiary care centre in urban area.

Materials and Methods: It is Hospital based descriptive, retrospective observational study. All probable cases of dengue were admitted with provisional diagnosis of dengue fever to the department of paediatrics for a period of one year. Total 198 children of age less than 14 years participated in present study.

Conclusions: Fever was the most common symptom found in all the patients. Majority of cases showed thrombocytopenia.

Dengue virus infection (DVI) is a mosquito-born disease and is a public health issue that is rising. The virus has been unwittingly transported from infectious areas to other parts of the world due to the upsurge of trade and tourist activity.1 The dramatic rise in dengue cases in Eastern India in 2012 became a public health issue as the majority of cases involved young teenagers. Infection with the Dengue virus causes substantial morbidity and mortality. India is one of the seven reported countries that routinely record dengue fever (DF) outbreaks in the South-East region, and all four serotypes are known to circulate either alone or in combination.2 In terms of presentation, the clinical presentations range from moderate constitutional signs to extreme dengue hemorrhagic fever (DHF) and dengue shock syndrome (DSS) infections. While most infections are self-limiting, a small subset of patients experience serious complications that require intensive care. These complications arise very late in the illness, like organ loss, possibly offering a window of opportunity to identify a subset of patients who are likely to proceed through these complications.

It is difficult to manage dengue infections because it needs not only good control of the vectors responsible for viral spread, but also precise and rapid detection. To date, the precise and timely diagnosis of early detection of Dengue virus remains an issue in the management of patients with dengue infection in many parts of the world, especially in resource-limited countries. Warning signals "which may mean that patients may progress to a serious illness and need strict medical attention." Major plasma leakage, hemorrhagic complications, and/or serious organ dysfunction can manifest as severe dengue. The assumption that patient age affects the form and severity of symptoms is a concession on the sensitivity of the WHO classification system. Early case detection and treatment plays a key role in preventing both the seriousness and fatality of cases of dengue. The purpose of this research was to evaluate the clinical profile of dengue infection in children under the age of 14 in urban areas of Telangana.

It is Hospital based descriptive, prospective observational study. All probable cases with positive dengue tests were admitted with provisional diagnosis of dengue fever to the Paediatric Ward of Apollo Institute of Medical sciences from period June 2018 to May 2019 i.e. for a period of one year.

Children who were positive for malaria, meningitis, and enteric fever.

The patients were exposed to all three serological examinations as the length of the history of fever may be fallacious. 198 were the total number of patients involved in our study. For the clinical and laboratory criteria, cases were followed up regularly. Blood parameters were tracked every day before remarkable clinical and haematological changes were seen. For each patient, averages of TLC, total platelet counts, Hb, haematocrit, and so on were measured and reported. With the tourniquet test, daily vitals were registered. Chest X-rays, ultrasonography, and liver function tests were conducted on all patients on day 3 of entry. As per the new WHO dengue guidelines,3 patients were treated with oral paracetamol, intravenous fluids and blood products, inotropes whenever necessary. The occurrence of different signs and symptoms was compared with the non severe and serious disease and the laboratory experiments. The observations have been tabulated and correlated. 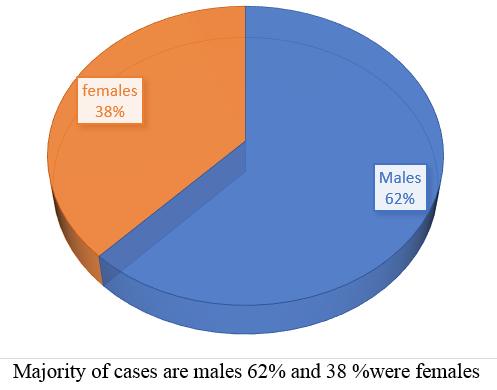 Out of 198 samples of clinically suspected dengue cases, 192 were found positive for Dengue NS1 antigen, 145 were found to be positive by IgG and IgM was positive for 139 cases (Table 1). In study done by Chajhlana SPS et al. 137 samples of clinically suspected dengue cases, 119 (86.9%) found to be positive dengue cases by laboratory confirmed cases (positive by one or more of the following tests NS1, antigen, IgM, IgG antibody). Study conducted by Anand et al found 83.3% positive cases. 4, 5

Most of the patients in study are hospitalized for a period of 3-6 days (51.5%). In study done by Shubhankar Mishra et al. The mean duration of hospitalisation was 3.8 days with 63.9% of patients were admitted in the hospital for 3–6 days.9

Leukopenia was seen in 29.8% of patients which was similar to two other studies. 14, 15 The earliest haematological abnormality is a progressive decline in total WBC count in patients of dengue . Leukopenia was not significantly related with severe dengue cases which were against some results. 16

The exact pathophysiology of thrombocytopenia in dengue is not yet clearly elucidated. Dengue virus may have a direct effect on the bone marrow -specially the progenitor cells causing a reduction in their capacity to replicate. An aberrant immunological response, implicated in severe dengue seems to play a significant role by dysregulation of plasma-kinin system. This leads to an increased consumption of platelets by disseminated intravascular coagulation (DIC). The damage is enhanced by increased apoptosis of platelets and generation of antiplatelet antibodies.

Thrombocytopenia is one of the common findings . Dengue is a common acute febrile illness which comes as an epidemic in various parts of the country including Telangana. Over the recent years, it has emerged as one of the dreaded fevers in children. Knowledge and understanding of the varied presentations of DF in a region will definitely help in improving the outcome of this potentially fatal disease.