Priya and Bindu M: Clinico - Hematological profile of dengue in children in a tertiary care hospital

Introduction: Dengue is one of the febrile illnesses which is caused by the Dengue fever virus. It affects people of all ages, from the infants to the elderly and is characterized by flu-like symptoms such as fever, anorexia, nausea, vomitings.

Materials and Methods: 382 children below the age of 18 years who presented with symptoms of dengue fever and were admitted into the pediatric ward and intensive care unit and tested NS1 positive or IgM positive were included into the study. Blood was collected for serological, hematological and biochemical analysis especially SGPT and SGOT.

Conclusion: Since the treatment of dengue is relatively simple, the patients must be made aware to seek the medical help as soon as possible to reduce the amount of morbidity and mortality.

Dengue is one of the febrile illnesses which is caused by the Dengue fever virus (DENV) belonging to the family Flaviviridae and genus Flavivirus. There are 4 closely related but serologically different types in this genus, DENV-1, DENV-2, DENV-3, and DENV-4. People in the endemic countries can be affected by any of these types. This virus is transmitted by the Aedes mosquitoes during a blood meal.1, 2, 3

In the recent years, Dengue fever has become one of the major health problems all over the world affecting both tropical and subtropical countries. World Health Organization has estimated that around 2.5 billion people are at risk of getting dengue infection out of which 1.8 billion reside in the South – East Asia and the Western Pacific.4 100 million people are affected by Dengue virus every year.5 Several hundred thousand persons are affected by DHF and DSS each year.4, 6 In India, Dengue was first reported way back in 1812, and since then, many cases have been reported all over the country with the most being from Calcutta, Delhi and Chennai.7, 8, 9 It is endemic in most of India especially in the rural places. Around 80 outbreaks have been reported I India, with the largest one in 1996 in Delhi, with 10252 cases reported and 453 deaths.5

The main causes for dengue can be attributed to the increase in the mosquito population due to the rainy season, population explosion in the urban areas, not to mention the urbanization and lack of proper hygienic condition such as open disposal of wastes.10

It affects people of all ages, from the infants to the elderly and is characterized by flu-like symptoms such as fever, anorexia, nausea, vomitings.11 However, in severe cases it may lead to complications such as Dengue Hemorrhagic Fever (DHF) and Dengue Shock Syndrome (DSS) which are generally life threatening. Since there is no vaccine, symptomatic treatment incruding hydration with fluids and monitoring the patient is the available option.12 DHF is characterized by vascular leaking of plasma, thrombocytopenia, which may lead to circulatory failure and DSS is characterized by shock.4 The fatality rates of these two complications are estimated to be 20% in case of DHF and 44% in DSS.4

Usually the first infection with dengue happens in the childhood, as the children population are more vulnerable, during their play time in the open. There have been reports of neonatal transmission also.13, 14 Moreover, the signs and symptoms which are associated with dengue are very similar to those by many of the other microorganisms, so identifying them as dengue is a challenge. Many tests such as specific and non specific tests are required to confirm the diagnosis as dengue fever.15 The specific tests for dengue consist of detection of the NS1 antigen. IgM or IgG antibodies, by either rapid tests or ELISA, the non specific tests are blood counts, platelet count, tourniquet tests, liver function test like SGPT and SGOT.16, 17 NS1 antigen is a glycoprotein present in the patients at vey high concentrations during the dengue infection. It can be detected as early as day 1 to day 9.12

Hence a very prompt and early diagnosis is required during the febrile stages so that its progress towards the complication can be arrested and the person can be treated immediately. We have conducted this study to analyze the clinical, hematological and biochemical parameter of patients affected by Dengue.

This study was conducted by the Department of paediatrics and Microbiology at Mallareddy Institute of medical Sciences over a period of two years. 382 Children below the age of 18 years who presented with symptoms of dengue fever and were admitted into the pediatric ward and intensive care unit and were tested NS1 positive or IgM positive were included into the study. All these 382 children presented with symptoms such as vomiting, diarrhea, acute fever of 2-7 days duration, hypotension, rashes, edema, headache, retro-orbital pain, myalgia, bleeding manifestations, shock.

This study was cleared by the Institutional Ethical Committee. After attaining the informed consent from the parents or guardians of the patients, detailed demographic details such as age, weight, temperature blood pressure etc. were taken from all the patients and they were all subjected to clinical and physical examination. Blood was collected from all the patients sent to the central laboratory for the complete blood picture including the platelet count, hemoglobin estimation, hematocrit estimation. Prothrombin and thromboplastin time and erythrocyte sedimentation rate. Biochemical tests such as liver function tests, urea, creatinine and electrolytes were estimated. Chest X-Ray was also done for all the patients. Detection of NS1 antigen, IgM and IgG antibody for dengue was done for all patient, for the confirmation of deNgue, in the beginning of the study. Serological diagnosis of the dengue fever was done by ELISA. However the titres of the antigen or the antibodies were not done.

Patients who were positive for malarial parasites or WIDAL tests were excluded from the study. Other causes of fever like septicemia, leptospitosis were also excluded from the study. In case ascites was suspected, ultrasound of the abdomen was also done. Torniquet test, CBP. ESP and platelet count was repeated daily as were the other biochemical parameters till the patient was discharged.

All the children were managed with IV fluids and blood products, where required. The patient was followed up and the outcome was observed.Statistical analysis was done using SPSS 14 software and mean and standard deviation was calculated. For comparison, fischer t test was used.

Sexwise distribution of the patients 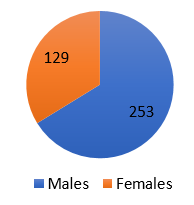 Symptoms of dengue in children

Classification of dengue among patients 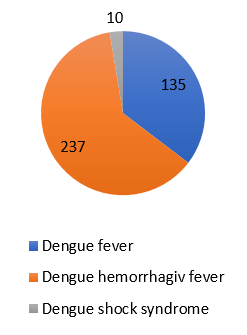 Dengue is one of the common global diseases which causes severe morbidity and mortality among patients and therefore is of concern. The clinical symptoms of this disease is very similar to that of malaria and typhoid, and especially in children, requires systematic differential diagnosis. The outbreaks of dengue is also on the rise due to industrialization and urbanization, which has resulted in over population. This is further accentuate with the poor hygiene, leading to stagnation of water and proliferation of the mosquitoes.18

In the present study, the prevalence of males affected were significantly more than the females. A higher male: female ratio was observed in a study by Selvan et al, who observed a 1.7: 1 ratio.19 Similar results were reported by studies of Agarwal et al and Goh et al,20, 21 while a female predominance was observed in studies of Mittal et al22 and Kabra et al.23

The mean age of the patients affected in our study was 9.56 ± 3.32 years with the youngest being2 years and the eldest 18 years. Most of the children were between 8 to 11 years. A study by Narayanan et al,9 Kabra et al23 and Banik et al24 reported 7 to 8 years to be the most common age group to be affected.

In some studies, there were cases with patients with no fever but with thrombocytopenia and leukopenia, showing that dengue may present in a wide range of signs and symptoms.37

Though dengue has high levels of morbidity and mortality, the treatment is fairly simple and relatively less expensive. However, for this, the patients need to seek medical intervention as early as possible. Therefore, the community must be made aware of the disease and to reach timely help at the earliest so that the severity of the disease can be curbed as early as possible and the treatment can be effective.

No financial support was received for the work within this manuscript.

The authors declare they have no conflict of interest.

SO De Paula BA Lopes da Fonseca Dengue: a review of the laboratory tests a clinician must know to achieve a correct diagnosisBraz J Infect Dis200486371