Shah, Gandhi, and Valia: A case report of large hydrometrocolpos in neonate

A case report of large hydrometrocolpos in neonate

2hrs old female, delivered at 38 weeks of gestation with abdominal distension with antenatal Ultrasound suggestive of 12*6 cm cystic mass in lower abdomen, mild hydronephrosis, Bilateral Renal pyelectesis. On examination she had lower abdominal distension, vulval oedema, lower limb oedema and also all four limb polydactyly. Post-natal Ultrasound examination revealed the presence of hypoechoic and corpusculated 12*6 cm cystic lesion in the midline with thick wall in continuity with vagina suggestive of Large hydro- metracolpos with bilateral mild hydronephrosis, both ovaries not visualised. Hysteroscopic examination showed obstruction due to imporforated hymen and narrowing at level of cervix and very thick mucoid secretion was found and drainage of about 100ml milky thick mucoid collection under USG guidance was done. 2DEcho was normal. According to these physical features, baby is likely to have McKusick-Kaufman syndrome.

Hydrometrocolpos is an accumulation of uterine and vaginal secretions as well as menstrual blood in the uterus and vagina. Usually this condition manifests at puberty caused by an obstruction of the female genital tract. The most frequent cause of hydrometrocolpos is the presence of imperforate hymen due to failure of partial resorption of this membrane during the embryonic development, the incidence is 0.0014-0.1% in full-term newborns.1, 2 Congenital hydrometrocolpos is a rare event with an incidence of about 0.006%.3 Incidence of McKusick-Kaufman syndrome. is 1:10,000.

US examination was showed an inhomogeneous hypoechoic and corpusculated cystic formation of about 12*6cm with well demarcated margins; located in mid region of the abdomen extending from the upper middle to the lowest region. The bladder was empty and compressed. B/L mild hydroureter and hydronephrosis, uterus was not visible.

Hydrometrocolpos was suspected and subsequently confirmed by physical examination of the external genitalia, showed vulval edema along with lower limb edema. Vaginoscopy guided hysteroscopy carried out and hysteroscopic drainage of approx. 100ml hydrometra. Subsequent US imaging showed normal appearance of the uterus and vagina.

Longitudinal scan reveal a largehypoechoic mass in mild region of the abdomen. 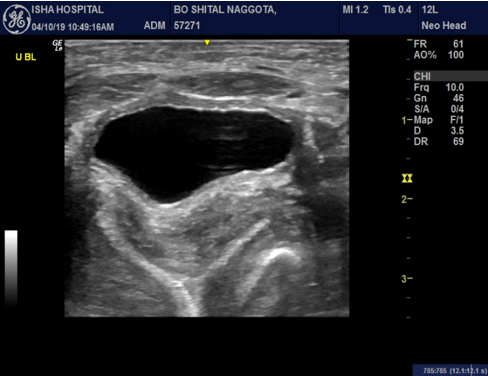 Hydrometrocolpos occurs by genital tract obstruction is associated with accumulation of cervical and endometrial gland secretions.

This condition caused by congenital malformations of the genital tract such as vaginal atresia, transverse vaginal septum and imperforate hymen. It may be associated with the MKKS, an autosomal recessive disorder characterized by vaginal atresia with hydrometrocolpos, polydactyly, congenital heart defects and nonimmune hydropsfetalis.5 In our case features of the McKusick-Kaufman syndrome. like hydrometrocolpos, polydactyly, lower limb edema, vulval edema & abdominal wall edema. 2D Echo was normal.

The previously reported low incidence of hydrometrocolpos could be due to difficulty in diagnosis and high mortality rates as suggested by Mittal et al. 6

MKKS is a very rare disorder. Incidence is 1:10,000. Caused by mutation of gene which play Important role in protein called “chaperonin” which is important for formation of the limbs, heart and reproductive system.

As described in other cases,7 hydrometrocolpos is usually diagnosed prenatally as the cause of abdominal cystic mass. However, in the present case prenatal examinations were all negative.

Imperforate hymen is a result of the hymen failing to rupture during the eighth week of gestation.

In hydrometrocolpos caused by imperforate hymen, hymenectomy has proved to be an adequate, conservative treatment.8

Hydrometrocolpos cause urinary stasis and acute renal failure due to obstructive uropathy.9, 10 In this case, physical and US examinations showed a large hypoechoic mass in the mid region of the abdomen extending from the upper middle to the lowest region and B/L mild hydroureter and mild hydronephrosis.

Hydrometrocolpos is a possible cause of huge abdominal swelling in a newborn. Imperforate hymen and obstructive uropathy could be associated conditions. Clinicians should consider the possibility of hydrometrocolpos as a cause of huge abdominal swelling in newborns. The genitals should be carefully examined to save patients from major surgeries and related complications

In conclusion, although hydrometrocolpos is a rare event, should be kept in mind if pre and/or postnatal examinations reveal the presence of pelvic mass.

All contributing authors declare no conflicts of interest.