Jagruthi and Gobbur: Study comparing the efficacy of Caffeine vs. Theophylline in Asphyxiated newborn for prevention of AKI

Study comparing the efficacy of Caffeine vs. Theophylline in Asphyxiated newborn for prevention of AKI

Background: Perinatal asphyxia is a multisystem disorder involving many organs, but its effect is more significant in the heart, brain, and kidneys. Involvement of kidneys presents as oliguria and sometimes anuria in the newborn. We compared the efficacy of prophylactic caffeine vs. theophylline given in these newborns in preventing AKI.

Materials and Methods: We performed a prospective study on the asphyxiated term and late preterm newborn babies admitted to the NICU. We allotted babies into group C and T, two groups – Group C –was given Caffeine, and Group T – theophylline. Theophylline and Caffeine drugs were given prophylactically as a single dose intravenously within 12 hours of birth. Babies were monitored for the development of renal injury, both clinically and with laboratory values. Serum creatinine and cystatin C levels in both groups were compared.

Results: A total of 100 babies with clinically confirmed perinatal asphyxia were allotted to 2 groups, 50 babies each. In the theophylline group, there were two deaths (4%), and in the caffeine group, only one death (2%) (P = 0.634). Clinically and laboratory wise both groups did not have any acute kidney injury. The cystatin C levels on day 1 were higher in Theophylline group than Group C (Caffeine) in our study. Further, these levels were higher than those in the study by M.Treiber et al. (P = 0.005).

Conclusion: Caffeine group babies had a better outcome, as the caffeine group had lower cystatin C levels on day three than theophylline group. Hence, caffeine is as effective as theophylline in the prevention of AKI in asphyxiated newborns.

Perinatal asphyxia (PA) is a multisystem disorder and a catastrophic entity observed in a delivery room setting, wreaking havoc in an otherwise uneventful delivery. According to the WHO statistics, around 4 million deaths occur annually due to PA.1 In low-income countries, approx. 23% of all neonatal deaths are due to perinatal asphyxia. In India, it is estimated that perinatal asphyxia is in the higher range (12 – 16%) compared to the developed nations (1 – 1.5%). 2, 3 PA is classified into various entities based on APGAR score 4 done at the first minute of life, as:

Perinatal asphyxia can involve the kidneys and may lead to oliguria or sometimes anuria in newborns. It is challenging to monitor urine output and serum creatinine in these babies. Term newborn usually does not pass urine till 24 – 48 hours, serum creatinine levels in these babies are generally a reflection of maternal serum creatinine levels, hence cannot be used as a reliable indicator for monitoring AKI. 5 Cystatin C levels are a more sensitive and specific marker to assess kidney injury; thus, cystatin C is used to monitor renal injury.

For preventing AKI, a single prophylactic dose of theophylline in the dose of 8mg/kg intravenously can be given, but it can be toxic, can cause seizures. Hence, as an alternative, caffeine can be tried as it is safer and does not cause neonatal seizures. It has minimal to no side effects; thus, caffeine is an appropriate choice for preventing AKI in asphyxiated term and preterm neonate. This is the first study that used caffeine and theophylline to prevent AKI.

The objectives were as follows:

The study sample is all term and late preterm and low birth weight neonates admitted in the NICU of Shri B.M. Patil Medical College Hospital with clinically diagnosed perinatal asphyxia and allotted to two groups – group C– Caffeine was given, and group T – Theophylline was given within twelve hours of life, after taking due written and informed consent. Prophylactic antibiotics and other treatments were given to all groups as per the unit protocol.

Blood samples were taken at admission and on day 3 of life (or NICU stay) and collected in a plain bulb (with red cap) or a lithium heparin bulb (with the green cap). After the 1st blood sample was collected for the investigation, the babies were either given caffeine or theophylline slow iv drip over 1 hour. Blood samples were again collected on day 3. All the samples were processed by centrifugation at 3500 rpm over 10 minutes to separate the serum from the plasma. The serum floats over the plasma as a supernatant, pipetted into Eppendorf tubes, and stored at -20°C till further analysis.

Cystatin C, a low molecular weight protein, belongs to the cysteine protease inhibitors superfamily. It is produced by all nucleated cells at a constant rate; its production is not affected by the diet, inflammatory states, lean body weight, or circadian rhythms. The glomeruli, similar to creatinine, freely filter cystatin C. It is reabsorbed by the proximal renal tubular epithelial cells and completely catabolized in them, and not returned to the bloodstream. Cystatin C levels are inversely related to the glomerular filtration rate. Hence cystatin C can be a potential biomarker to determine early insult to the kidney.

We used the standards (recombinant human cystatin C) as control. The samples were incubated in the microtitre plate wells pre-coated with polyclonal anti-human cystatin C antibody for 30 minutes. After incubation, the wells were washed with the wash solution (deionized or distilled water). The horseradish peroxidase enzyme (conjugate solution) was added to all the wells and incubated for another 30 minutes. The plate was rewashed after 30 minutes, then the substrate solution (TMB- tetramethylbenzidine) was added to the wells and allowed to incubate for 10 minutes. The wells acquire a blue color after adding the substrate solution. The plate was again washed after 10 minutes, and the color development was stopped by adding the stop solution (0.2M sulphuric acid), which after addition to the wells changed the blue color to yellow. A microplate reader analyzed the plate for the absorbance range set between 450nm - 630nm. Simultaneously serum creatinine levels were also assessed and compared with the cystatin C ELISA values.

Calculation based on the formula:

where μ1 and μ2 are the mean outcomes in the control and experimental group respectively, σ is the standard deviation

All characteristics were summarized descriptively. For continuous variables, the summary statistics of N, mean, standard deviation (SD) were used. For categorical data, the number and percentage were used in the data summaries. We analyzed the data by Chi-square test for Association, comparison of means using t-test, ANOVA, and diagrammatic presentation. If P < 0.005, the results were considered as statistically significant. Data were analyzed using SPSS software v.23 (IBM Statistics, Chicago, USA) and Microsoft Office 2007.

Comparison of parameters studied between the groups

Comparison of values in our study, with those, in the study by M Treiber et al. 6 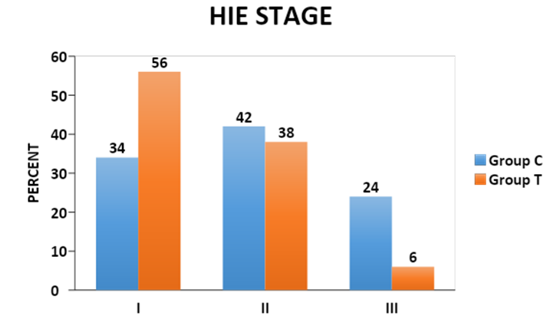 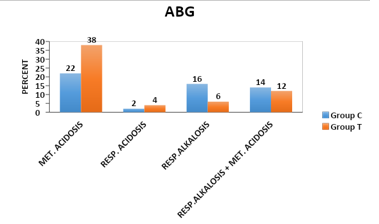 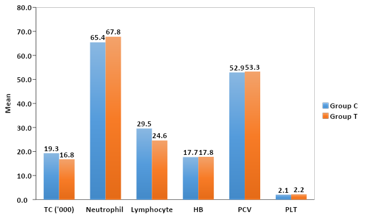 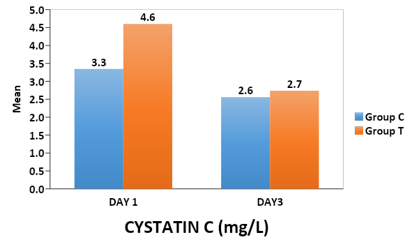 Only one baby of the caffeine group had died, whereas two babies of the theophylline group died. However, the cause of death is not due to kidney injury. All three of the babies had an intrapulmonary bleed as a complication - DIC and sepsis. The mean duration of NICU stay was longer in the caffeine group, whereas the theophylline group had higher mortality.

The laboratory parameters are statistically significant for the caffeine group compared to the theophylline group. (Figure 3) In contrast, there is not much statistical significance between the other lab parameters like Hb, PCV, Platelet, CRP, serum calcium, and serum creatinine levels. Cystatin C values on day 1 were lower in the caffeine group as compared to the theophylline group. Cystatin C levels were in the normal ranges in both groups; hence there is not much statistical significance on day 3. (Figure 4).

Pharmacologically, a part of theophylline is metabolized to caffeine, a trimethylxanthine in neonates.7 Theophylline and caffeine also act as diuretics, the former being more potent than the latter.5, 8, 7, 9, 10

A single dose of caffeine citrate 20mg/kg was given to prevent acute kidney injury in asphyxiated newborns in our study. Compared with theophylline 8mg/kg iv, the caffeine group results were comparable to that of the theophylline group.

The authors disclose no acknowledgements for the present study.

Use and abuse of the Apgar score. Committee on Fetus and Newborn, American Academy of Pediatrics, and Committee on Obstetric Practice, American College of Obstetricians and GynecologistsPediatr1996981412