Venugopalan and Narayanan K A: Outcome of management of preterm babies born below 34 weeks of gestation in a level - 3 Neonatal ICU of a teaching institution in a backward district of Kerala- A retrospective analysis

Background: Preterm birth is considered as the main cause of neonatal morbidity and mortality. This also results in major sequelae in surviving children. It is essential to establish the factors leading to preterm delivery and the clinical profile of preterm infants. This is particularly important in a backward district where 20% of populations are tribal with poor access to health care. This study retrospectively analyses the outcome of care of preterm infants in a level 3 NICU.

Objectives: I) To study the outcome of management of preterm babies below 34 weeks of gestational age at birth in a backward district of Kerala. 2) To evaluate the risk factors for mortality and permanent sequelae in these babies.

Materials and Methods: This is a retrospective analysis of hospital records of preterm infants admitted in a neonatal ICU of a tertiary teaching hospital for one year from 1st of January 2017 till 31st of December 2017. Both inborn and out born infants born below 34 weeks of gestational age are included. Maternal and baby related factors are taken into account. All the infants are provided level 3 care and the details of the treatment and outcome are studied. The data are entered in Microsoft excel and analyzed.

Conclusion: Out of 141 preterm infants, with a gestational age below 34 weeks’ gestational age at birth, admitted in the NICU, 6 (4.25%) died. Majority died in the first week of admission. Most of the children had multiple congenital anomalies and comorbid illnesses which is managed successfully in the NICU. Shortest hospital stay was 1 day and longest stay was 79 days, with a mean of 21 days.

Preterm birth is a major cause of neonatal morbidity and mortality worldwide. It is also the main contributory factor for mental and physical retardation acquired after birth. Except for congenital malformations, 75% of perinatal deaths and 50% of neurological abnormalities are directly attributed to preterm birth.1, 2, 3 Due to advances in technology and improvements in neonatal care, several preterm newborn babies survive with least sequelae. However, many of them remain vulnerable to long term complications that may persist throughout their lives. Among the main long term morbidities are neurosensory deficits (blindness, deafness), necrotizing enterocolitis, intraventricular hemorrhage, broncho-pulmonary dysplasia and delay in physical and mental development.4, 5 This study focuses on the outcome of preterm babies born below 34 weeks of gestational age treated in a level-3 NICU of a tertiary care teaching hospital in Wayanad, a backward district of Kerala. This study is done in the NICU of Doctor Mooppen's Wayanad Institute of Medical Sciences (DMWIMS) Medical College Hospital, the only medical teaching institution in the district and the only hospital with level 3 NICU. This facility caters to a total population of about twenty lakhs taking in to account adjacent areas of neighboring districts of the state and the states of Tamilnadu and Karnataka. Tertiary level health care facilities and level 3 NICU care are not available anywhere nearby.

This is a retrospective analysis of hospital records of preterm infants admitted in a neonatal ICU of a tertiary level teaching hospital for a period of one year from 1st of January 2017 till 31st of December 2017. Both inborn and out born infants born below 34 weeks of gestational age are included. 34 weeks of gestational age at birth is taken as a cutoff age since babies born above 34 weeks of gestational age are neurogically mature for sucking at the breast and taking oral feeds. Maternal factors like Parity, Anemia, Gestational Diabetes Mellitus (GDM), Antepartum Hemorrhage (APH), Pregnancy Induced Hypertension (PIH) and Cesarean Section (CS) are recorded. Fetal factors such as Birth Weight, Weight on Admission to NICU, Length of Hospital Stay (LOS), Infection, Respiratory Distress Syndrome (RDS), Congenital Anomalies and Death during hospital stay are noted. All the infants are treated in a level 3 NICU and the type of treatment and outcome are studied. The data analysis will be carried out by subgroups according to gestational age at birth of these preterm babies, probable causes for preterm birth, birth weight, therapeutic interventions, and outcome at discharge. Then, the respective rates, ratios and relative risks will be estimated for the possible predictors. 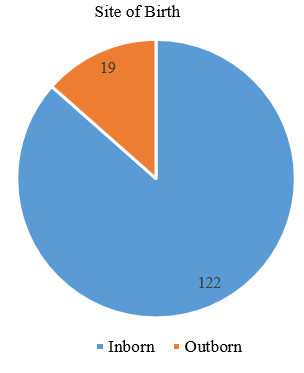 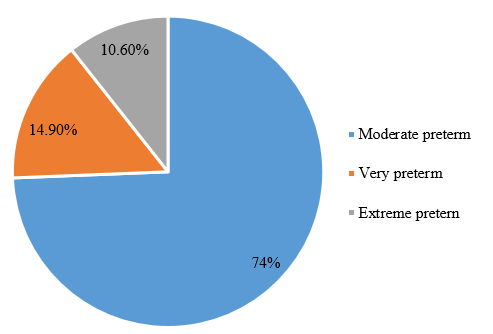 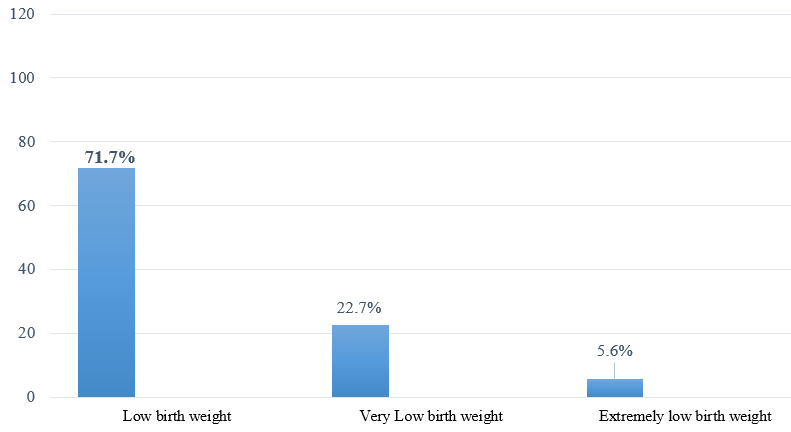 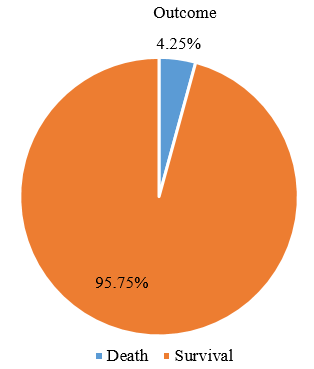 No single maternal cause was attributable to prematurity. Most of the mothers were primi gravidae (41.1%) or second gravidae (34.75%). There were 15 (10.6%) twin pregnancies. Other maternal factors noticed are Pregnancy Induced Hypertension (PIH) in 9 mothers, Gestational Diabetes Mellitus in 4, Ante Partum Hemorrhage in 2 and Anemia in 2 mothers respectively. All the preterm deliveries were attended by pediatrician. All preterm deliveries were informed to NICU prior to delivery and most of the cases referred from outside are informed while being referred in, so that arrangement for receiving the baby in the NICU was undertaken. All babies < 34 weeks of gestational age at birth were invariably shifted to NICU for preterm care. 22(17%) babies needed resuscitation at birth. All the premature infants were nursed in thermo-neutral environment (around 36.50 C). Oil is applied to skin to reduce convective heat loss and evaporative water loss. Babies once they are stable are given kangaroo 4.25mother care to provide warmth. All preterm infants developed jaundice within the first week. If baby is found to be jaundiced, serum bilirubin is done and phototherapy started based on bilirubin level. Jaundice was not controlled by phototherapy in one baby and was subjected to exchange transfusion.

Co morbid illnesses and complications were controlled with NICU management and 135 babies were discharged in good condition. 24 babies had congenital anomalies out of which 9 babies with ROP were referred out for further management. Advice as appropriate was given for management of undescended testes, cleft lip, hydro-uretero-nephrosis, tracheo-esophageal fistula and jejunal atresia.

Preterm birth is a major cause of neonatal morbidity and mortality worldwide. It is also the main cause responsible for deficiencies acquired after birth. Preterm newborn babies represented 12.5% of live births in the United States in 2004.6 Preterm births are spontaneous in 75% of the cases.7 In this study preterm births are spontaneous in 85.8% of cases and caesarian section had to be done in 20(14.2%) cases. It is reported that more than half are associated with preeclampsia, fetal distress, intrauterine growth restriction, abruptio-placentae, and placental insufficiency.8 But in our study maternal factors such as PIH, APH, GDM and anemia are not found to be significantly contributing to prematurity. Respiratory distress (24.11%), sepsis (7.1%) and perinatal asphyxia (6.4%) are significantly high in this cohort and may be contributed by prematurity. It is reported that approximately half the spontaneous preterm births are associated with intrauterine infection, which triggers the maternal and fetal infections leading to preterm labor.9 There are many studies showing the association between infections such as periodontal disease and bacterial vaginoses with preterm labor and premature rupture of membranes.10, 11 There is strong relationship between multiple pregnancies and preterm birth, and prematurity is the main complication in these pregnancies.12 In this study 10.6% of cases had multiple pregnancies.

Even though sepsis, respiratory distress and ROP have been reported among this cohort it is less when compared to other studies.13 Few other studies have shown higher rates of cerebral palsy, cognitive impairment, and behavioral problems among those born at very early gestations.14, 15, 16, 17 and causing major neonatal morbidities and high risk for significant impairment in later life. The rates of attempted resuscitation for infants in our study were similar to several other studies.18 These infants received interventions such as chest compressions, Surfactant therapy, tracheal intubation, ventilator support or parenteral nutrition. It is possible that the differences in resuscitation practices may influence quality of survival and mortality. Previous studies have proposed individual decision-making in resuscitation of extremely preterm infants.19, 20 whereas other studies have examined more major differences in resuscitation practice and subsequent outcomes at the hospital leve1.21, 21 Population-based studies and analyses are needed to gain a better understanding of the determinants of and extent to which regional practice variations influence mortality and survival rates.

Death among preterm infants is only 6 (4.25%) in this cohort. Out of 8 extremely low birth weight infants only one died from the hospital. Majority of extremely preterm births in this cohort occurred in hospitals and this may be the reason for low mortality. Out of 141 preterm infants, 135 infants could be discharged from the NICU in good condition. This highlights the comprehensive care given by the team in this level-3 NICU. Increase in survival was seen in infants born at a tertiary teaching hospital with a level-3 NICU, which has been reported in other studies.22, 23

Outcome of management of premature babies in this level-3 NICU of a backward district is comparable with other NICUs across the world with a survival of 95.75%. Maternal factors that contribute to preterm births are multiple pregnancies, being primi gravida and perinatal sepsis. Neonatal morbidities contributed by prematurity are perinatal asphyxia, respiratory distress and sepsis. Factors contributing to mortality are multiple congenital anomalies, respiratory distress and septicemia. What is further required is detailed analysis of cause of death other than complex congenital anomalies. This would help in formulating strategies to further improve the outcome in neonatal period. Also a close follow up till 6 months to one year of age should be there to assess the quality of survival, possible sequelae and their standard management.

All contributing authors declare no conflicts of interest.

M S Pignotti G Donzelli Perinatal care at the threshold of viability: an international comparison of practical guidelines for the treatment of extremely preterm birthsPediatr20081211e1938

© This is an open access article distributed under the terms of the Creative Commons Attribution License Attribution 4.0 International (CC BY 4.0). which permits unrestricted use, distribution, and reproduction in any medium, provided the original author and source are credited.