Ali, Lakshmi, Reddy, Nazneen, and Muzammil: A prospective study on etiological factors and clinical indicators in term and near term neonates admitted with hyperbilirubinemia in nicu in a tertiary care hospital in Hyderabad, India

A prospective study on etiological factors and clinical indicators in term and near term neonates admitted with hyperbilirubinemia in nicu in a tertiary care hospital in Hyderabad, India

Objectives: 1. To study the etiology and risk factors of neonatal hyperbilirubinemia in term and near-term infants. 2. To study the clinical course of these infants during NICU stay

Materials and Methods: The present study was conducted at NICU, Department of Pediatrics, Princess Esra hospital, Deccan Medical College, Hyderabad, India, from October 2019 to October 2020. Term and late preterm infants admitted in NICU with Serum Bilirubin levels more than 12mg/dl were included in the study. The risk factors, etiology and clinical profile of these infants during NICU stay were studied.

Results: 210 neonates were admitted in NICU with hyperbilirubinemia (Serum Bilirubin >12mg/dl) during the study period, out of which 118 were male (56.20%) and 92 were female (43.80%). Neonates were further distributed based on gestational age, in which 46 (21.90%) were late pre-terms i.e. between 34-37 weeks and 164 neonates (78.10%) were full term i.e. greater than 37 weeks. The neonates were also classified based on their birth weight, with neonates between 2500-3000 grams having the highest incidence (46.19%). Lastly, the etiological and risk factors were assessed and quantified, with physiological jaundice occurring as the major cause and late prematurity as the most common risk factor associated with neonatal hyperbilirubinemia. The average duration of phototherapy was 2.50 days and 3 babies required Double Volume Exchange Transfusion (DVET) for significant hyperbilirubinemia.

None of the babies requiring DVET had clinical features of Bilirubin Induced Neurological Dysfunction (BIND) during NICU stay.

Conclusion: 1. Most common cause of neonatal hyperbilirubinemia was found to be Physiological followed by Septicemia and Idiopathic etiologies. Blood group incompatibilities were less common causes. 2. Phototherapy is a cheap and effective way to reduce bilirubin levels in neonatal jaundice. 3. Exchange transfusion is a safe procedure and should be considered when indicated, to decrease the incidence of BIND. All cases requiring DVET were due to blood group incompatibility.

Jaundice is the commonest abnormal clinical finding in neonates.3 The average incidence of neonatal jaundice in India, as reported in several publications, is around 54.6% to 77%.4 Jaundice occurs when the immature neonatal liver is unable to clear a sufficient amount of bilirubin from the plasma.5 Yellowish discoloration of the skin is the result of accumulation of unconjugated lipid-soluble bile pigment.6

Pathological jaundice is known to occur in 4-8% of newborns.7 The common causes include blood group incompatibilities, prematurity, G6PD deficiency and sepsis with majority being idiopathic. Other less common causes include Infants of diabetic mothers, cephalhematoma and polycythemia.8 The immature brain of the newborn is susceptible to unconjugated bilirubin toxicity resulting in the acute manifestation, BIND.9

Assessment of jaundice should be done in the natural light. The pulp of the finger or thumb is pressed into the baby’s skin, preferably over a bony part till it blanches and underlying skin is noted for the yellow discoloration.

The criteria for intervention to control hyperbilirubinemia vary in different clinical situations, and on gestational age of the infants. Intervention for neonatal jaundice is based on guidelines for phototherapy and exchange transfusion for infants more than 35 weeks of gestation as published by the American Academy of pediatrics.10 Phototherapy is a cheap, effective and safe method of management of neonatal hyperbilirubinemia.11

The present study will try to analyze the causes, risk factors, both maternal and neonatal, and clinical profile of neonates admitted with hyperbilirubinemia.

The present study was conducted at NICU, Department of Pediatrics, Princess Esra hospital, Deccan Medical College, Hyderabad, India, from October 2019 to October 2020. A written informed consent was obtained from all parents of the babies involved in this study.

The babies delivered at the hospital as well as babies referred from other hospitals of age 0-28 days during a period of one-year duration were included in this study. Late pre term and full-term babies, both healthy and sick, were included.

Comprised of 210 neonates with jaundice (serum bilirubin more than 12mg/dl) hospitalized in the neonatal unit in Princess Esra hospital during the study period.

Jaundice was identified and assessed by clinical methods and confirmed by biochemical methods. Jaundice was clinically estimated by Kramer’s rule in broad daylight and confirmed by Serum bilirubin. Detailed antenatal, natal and postnatal history was taken. Clinical risk factors for jaundice were documented for every baby, and a detailed neurological examination including BIND score was performed for all babies requiring treatment for jaundice. A basic evaluation for cause for hyperbilirubinemia (CBP, Reticulocyte count, G6PD and DCT) was done in babies with Serum bilirubin levels more than 18mg/dl.

Serum Bilirubin measurement estimation was done via Van den Bergh method. Only those babies having serum bilirubin concentration of more than 12 mg/dl were included in the study.

Babies were treated according to guidelines published by American Academy of Pediatrics charts with phototherapy and/or exchange transfusion. Serum bilirubin levels were monitored periodically. The neonates were treated according to standard guidelines and monitored throughout their stay in the hospital. The side effects of phototherapy and/or DVET were documented during NICU stay.

Approval from Institutional review board was obtained before the study was initiated. 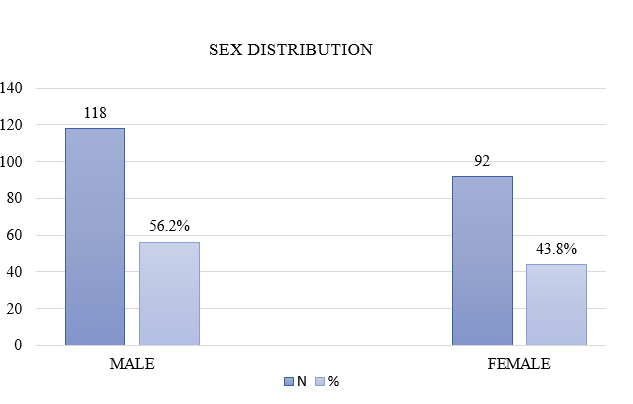 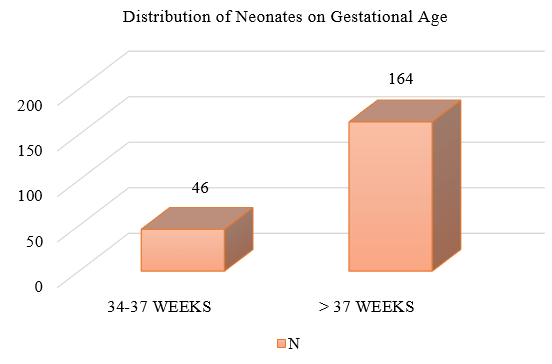 Distribution According to Mode of Delivery. 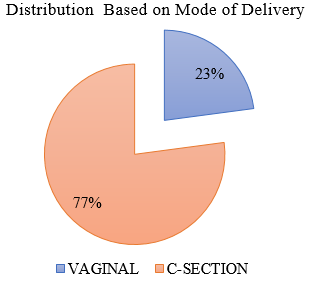 Distribution according to Birth weight

Distribution based on birth weight

Fetal prematurity was found to be the most common risk factor followed by prolonged labor. Birth Asphyxia and PROM > 18 hours were the other risk factors noted behind the etiologies. as depicted in Table 2 . Considering the Etiology our study have ruled out that out of 210 Neonates studied, the etiology was Idiopathic Hyperbilirubinemia in 28 neonates, physiological hyperbilirubinemia seen in 141 neonates, ABO and Rh incompatibility was the cause in 7 neonates each, Septicemia was identified as the cause in 26 neonates and G6PD deficiency was the cause in 1 neonate. Physiological jaundice was taken as Serum Bilirubin levels less than 15mg/dl in well infants with no other risk factors for jaundice.

Distribution Based on Sr. Bilirubin when starting Phototherapy

Distribution of Neonates Based on Mode of Therapy

Distribution based on BIND Score and Etiology. 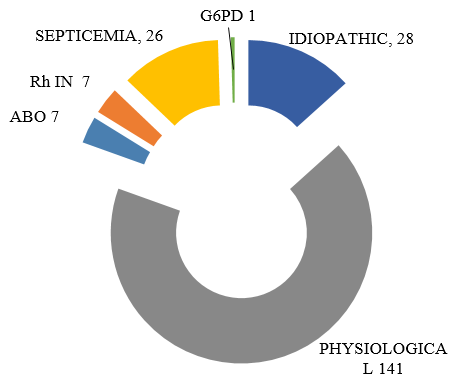 In our study, the average BIND score for babies with Idiopathic pathological jaundice was 3, for ABO, Rh incompatibility and Septicemia the score was 2 and the average score for babies with Physiological jaundice and due to G6PD deficiency was 1. An average BIND score of 1.8 was thereby noted for the 210 neonates involved in this study as shown in Figure 4.

Total of 210 neonates of neonatal hyperbilirubinemia were studied in detail

Narang et al 12 also found a male predominance in their studies with 56.2 cases of the male sex.

46 neonates from the 210 were pre-term with 21.90% incidence while 164 neonates having an incidence of 78.10% were more than 37 weeks. Singhal et al 13 have found prematurity as the second most common cause of hyperbilirubinemia in their studies. Narang et al 12 found jaundice in 47.9% out of 917 preterm babies.

From the 210 babies involved in this study, the average age of the babies at the time of admission for phototherapy was 5 days of life.

Narang et al 12 concluded from their studies that the incidence of neonatal jaundice was three times higher in LBW babies compared to babies above 2500 grams.

In our study, 35.71% neonates were of low birth weight. It is mainly because of maternal under nutrition, poverty, underutilization of health services and illiteracy seen in the general area.

Singhal et al.13 found in their study that the commonest etiology behind babies requiring exchange transfusion was Rh incompatibility followed by ABO incompatibility and G6PD deficiency. Narang et al 12 found that the most common cause was Idiopathic, followed by Septicemia and G6PD deficiency. Rest of the 207 neonates in our study received phototherapy alone. Phototherapy was started when serum bilirubin was more than 12 mg/dl and was given for 24, 48 or 72 hours.

An average BIND score of 1.8 was noted among the 210 neonates included in this study. None of the neonates developed encephalopathy. This is probably due to early identification and referral of these infants by their pediatricians for early intervention.