Mustaqueem, Hassan, and Agarwal: Evaluation of peripheral lymphadenopathy by fine needle aspiration cytology: Our experience at a tertiary care center

Evaluation of peripheral lymphadenopathy by fine needle aspiration cytology: Our experience at a tertiary care center

Introduction: Peripheral lymphadenopathy is frequently due to a local or systemic benign infectious disease. However, it could be a manifestation of underlying malignancy. Fine needle aspiration cytology (FNAC) acting as a reliable diagnostic tool to find out the cause underlying the lymphadenopathy enables the clinician to plan appropriate management for each patient.

Objective: The present study was undertaken to assess the utility of FNAC in evaluation of peripheral lymphadenopathy cases in different age groups and sex and to study the cytomorphological patterns in these cases.

Materials and Methods: A retrospective and prospective observational study was conducted in the Department of Pathology, Hind Institute of Medical Sciences over the duration of 2 years. A total of 331 lymph node FNA aspirates were studied. Aspirated material was routinely stained with Haematoxylin & Eosin and Papanicolauo stains. Ziehl Neelsen stain was used wherever required.

Conclusion: FNAC is a reliable method of diagnosing the pathology underlying enlarged superficial lymph nodes; thus acting as a triage to distinguish the cases with a suspicion of significant disease. At the same time, it also provides material for ancillary studies especially in lymphoproliferative lesions.

Peripheral lymph nodes, located deep in the subcutaneous tissue are an important part of immune system as they clean antigens from the extracellular fluid.1 There are diverse etiologies of peripheral lymphadenopathy, ranging from benign reactive conditions (eg viral or bacterial infections including tuberculosis) to metastatic carcinomas and lymphomas.2 As the enlarged lymph nodes are easily accessible for fine needle aspiration cytology (FNAC), it permits rapid diagnosis with minimum intervention.3 Thus it allows a provisional diagnosis to be made at the patient’s initial presentation and helps to guide appropriate specialist referral and further investigations.

Aspiration of lymph node for diagnostic purpose was first reported in 1904 by Grieg & Gray in the diagnosis of trypanosomiasis. In 1921, Guthrie attempted to correlate lymph node aspiration cytology with various disease processes.4, 5, 6

The dilemma to approach a patient with peripheral lymphadenopathy, its evaluation and management, considering various differential diagnosis, prompted us to take up this study. We conducted this study to take evaluate the role of FNAC in the diagnosis of peripheral lymphadenopathy and to study the pattern and spectrum of diseases associated with them in different age groups and sex in this geographical area.

All FNA performed on patients with palpable lymph node enlargement in the Department of Pathology, Hind Institute of Medical Sciences, Barabanki between January 2018 to December 2019 were included in the study. A total of 331 cases were included in the study; out of which 176 were retrospective and 155 prospective. Relevant data including age, sex, clinical presentation and other relevant investigations were retrieved from records. The cytology smears of retrospective cases were retrieved from records of pathology department. In the prospective cases, aspirates were performed by cytology staff using 22-24 gauge needle by non-aspiration/aspiration technique. Routinely 2 aspirates were performed and direct smears were prepared. Slides were immediately immersed in 95% methanol for wet fixation and the remaining slides were air dried for dry fixation and stained with Haematoxylin and Eosin and Papanicolaou stains. Special stains like Ziehl Neelsen (ZN) stain for acid fast bacilli were used wherever required. Stained smears were examined under the microscope and results were analysed to study the spectrum of pathologies reported on FNAC.

At the end of study period, the data was analyzed using Advanced Excel software. Fischer’s exact test was used to check the association of age and sex with the cytodiagnosis. P-value ≤ 0.05 was considered as significant.

Distribution according to group of lymph nodes involved

[i] Fisher’s exact test was applied.

[i] Fisher’s exact test was applied. 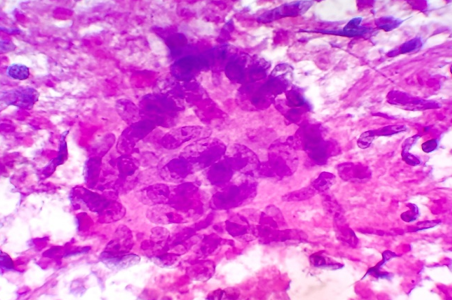 Metastatic carcinoma with abscess showing fragment of malignant epithelial cells in a background of purulent exudates. H and E x 400 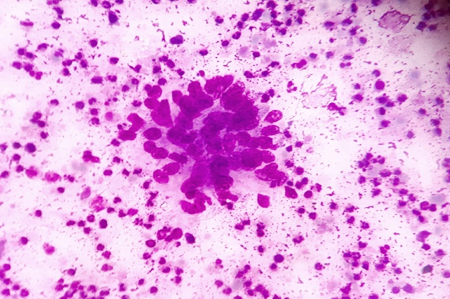 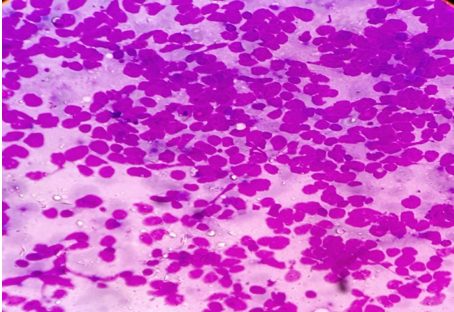 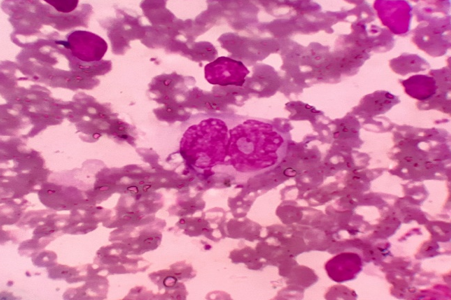 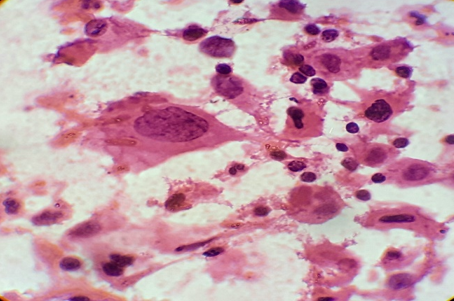 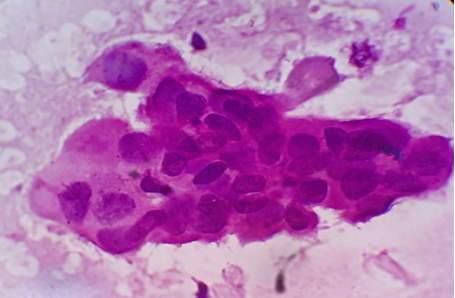 FNAC is a valuable diagnostic technique in the evaluation of cases of superficial lymphadenopathy. The categorization of the causes of lymphadenopathy into reactive, inflammatory and lymphoproliferative could be reliably done by FNAC. A high sensitivity (71.4%) and specificity (91.5%) of FNAC was reported in previous studies for the evaluation of lymphadenopathy.7 The use of this technique has limited the need for excision of enlarged lymph nodes, especially in cases of reactive and tubercular lymphadenitis where conservative management can be offered to patient just on the basis of cytological diagnosis. However potential cytological misdiagnosis may occur, either in lymphomas that present an apparently admixed cell pattern (false negative cases) or in reactive proliferations in which atypical cells are identified (false positive cases).8 In such cases, the cytological diagnosis should be followed by histological evaluation for accurate diagnosis and subtyping and grading in cases of primary lymphoproliferative disorders.

The age group which was studied ranged from 6 months to 75 years with maximum cases in ≤15 years which is comparable with the study of Pandey P et al. However Shilpa G et al, Patel MM et al and Kumar H et al.9, 10, 11, 12 found maximum number of cases in the age group 21-30. The variation may be due to different population density or geographic variation.

In the present study, the incidence in male (58.3%) was more than that in females with male to female ratio (1.4:1). Similar male preponderance was noted by Patel MM and Kumar N et al.10, 11

The most frequent site of FNAC was cervical region (67.07%), followed by axillary region (11.18%). Similar findings were also observed by Wilkinson AR et al, Shah PC et al and Mohanty R et al.13, 14, 15 The reason behind this may be the easy accessibility of cervical lymph nodes for examination and evaluation.

Amongst the neoplastic lesions, the most common lesion was of metastatic carcinoma (43/54); followed by NHL (8/54). Only 3 cases of HL were detected in this study.

Amongst the metastatic lesions, squamous cell carcinoma was the most common variant seen. A similar finding was reported by Shah PC et al, Mamatha K et al and Mohan A et al.19, 20 This correlates with the higher incidence of upper aerodigestive tract malignancy in India, possibly due to habbit of tobacco chewing in Indian population. However, Ghartinagar et al21 showed relatively higher incidence of metastatic adenocarcinoma in their study.

Most common age group presenting with metastatic carcinoma was ≥50 years (27/43); followed by 35-50 years. This finding was in concordance with the finding of Ghartinagar et al21 and Agarwal et al.22 The possible reason may be because advanced age group is itself a risk factor for carcinoma.

Lymphoproliferative disorders formed a very small proportion (3.31%) of the total pathologies reported, a finding which correlates with other studies.9, 13, 14 However Dowerah et al23 reported a higher incidence of 10.6% cases of lymphoma in their series. This variation may be due to difference in demographics, environmental and genetic influence.

We further advised histopathological examination in these cases, but excision biopsy was done in only 5 cases – 4 NHL and 1 HD; which showed concordant results. Rest of the cases were lost in follow up.

To summarize, FNAC is a valuable and reliable screening tool in outpatient department. It helps to categorize the patients into 2 groups; one which can be treated conservatively without requiring histopathological assessment and the other which requires further hisopathological assessment and other ancillary tests for diagnosis. Hence the use of this rapid technique allows a provisional diagnosis to be made at patient’s initial presentation and helps to guide the clinician to manage the patients accordingly. Our statistical data suggests the role of different etiologies in different age groups varying from reactive to metastatic. So it is emphasised that we must keep in mind the higher possibility of neoplastic lesions in ≥50 years age group and should take up ancillary studies on the cytological samples itself for definite diagnosis. This will not only save the time, but is also cost effective; a point to be considered in a developing country like ours.

N Berliner Approach to the patient with lymphadenopathyBest Pract Med2000284