Background: The proportion of cancers of genital tract origin in females ranges from 22.4% to 55.8% in India; thus posing a major health problem. The first step in controlling the cancer burden in any population is to collect information about its salient features in that particular cohort of patients. This study was performed to ascertain the profile of female genital tract malignancies reported at our center regarding the relative frequency of involvement of various sites, age and symptoms at presentation and histological subtypes.

Materials and Methods: All the confirmed cases of female genital tract malignancies received in the Department of Pathology were studied for a period of 2 years from November 2008 to October 2010.

Conclusion: As female genital tract malignancies form a huge burden of morbidity and mortality in India, there is a need to establish better screening programmes aimed at early detection and educate the public regarding the risk factors as well as early symptoms of the disease so that people can adapt appropriate behaviour.

Female genital tract (FGT) is the site of large number of tumours of considerable diversity, some very common and some extremely uncommon. However due to lack of cancer awareness and effective screening programmes in most developing countries including India, these malignancies constitute a major health burden.1, 2 Also these tumours have dissimilar pattern of distribution and clinical presentation worldwide with ethnic, environmental and geographic variation. However the data relating to the clinicopathological characteristics of these tumours is deficient from Indian subcontinent indicating significant knowledge gap. An attempt is therefore made in the present study to assess the relative proportions and clinicopathological characteristics of FGT malignancies in our institution by a descriptive prospective histopathological study.

All cases reported at our center or referred to it and treated in the Department of Gynaecology over a period of 2 years were reviewed. The clinical data was collected from patient record files, discharge books and pathology request forms. From these data sources, age at diagnosis, clinical presentation at diagnosis, part of FGT affected and histopatholological characteristics were extracted. The data were entered into a computerized spreadsheet and analysis performed using Advanced Excel Sheet. Frequency distributions and descriptive statistics were calculated for each variable.

Distribution of cases of FGT malignancy according to site 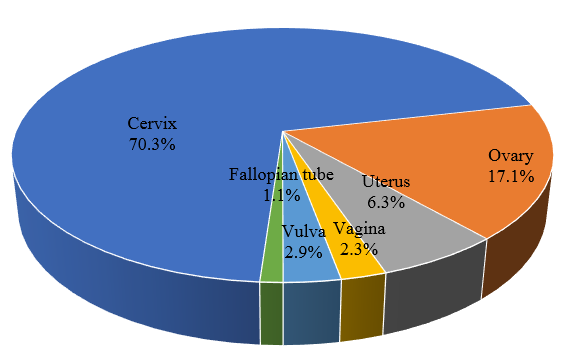 Distribution of cases of FGT malignancy according to site

Distribution of cases of FGT malignancies according to different age groups 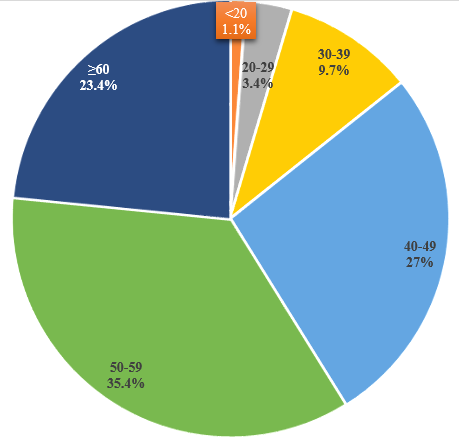 Distribution of cases of FGT malignancies according to different age groups

Symptoms at presentation of FGT malignancies

Symptoms at presentation of malignancy of FGT

Distribution of FGT malignancies according to histological type

During the period of 2 years under study, a total of 175 cases of FGT malignancies were diagnosed in our institution; out of which majority were from cervix (70.3%), followed by ovary (17.1%), uterus (6.3%), vulva (2.9%), vagina (2.3%) and fallopian tube (1.1%). This supports previous institutional based studies from other developing countries that found the commonest FGT malignancy to be cancer of uterine cervix.3, 4, 5, 6, 7, 8 However the pattern of malignancy in our study differs from a study by Momtahen in Iran that showed a higher incidence of endometrial cancer (58%) and lesser prevalence of cervical cancer (13.6%).9 The prevalence of cervical cancer in the current study, like in other developing countries has been attributed to the high prevalence of child marriage, early sexual activity, ignorance and lack of effective cancer screening programmes.

The mean age of women diagnosed with cancer of cervix was 51.9 years and maximum cases were in the age group of 50-59 years. However the data from Surveillance, Epidemiology and End Results Program of United States and European Union showed significantly higher proportion of cervical malignancies in the younger age group as compared to those reported at our center.10 This may be a manifestation of better screening programmes in the US where cervical malignancy is detected in younger patients at a localized stage.

In the current study, the most common clinical presentation of women with carcinoma cervix was bleeding per vaginum; similar to other previous studies.11, 12

Ovary was the second leading site among FGT malignancies at our centre; constituting 17.1% of total FGT malignancies. This is in accordance with the data from Globocon 2002 which also shows a relatively higher incidence of ovarian malignancies in the West; similar to data from NCRP and other cancer registries in India.14, 15, 16

The most common complaint of the patients of endometrial carcinoma in this study was abnormal uterine bleeding which was observed in 81.8% cases. Similar findings were reported by Hacker et al.21

Amongst the various histological subtypes of uterine malignancy, endometrioid adenocarcinoma was the most frequent type constituting 82% of all cases. Similar findings were observed by Platz et al22 who reported it to be 81.5%.

Vagina, vulva and fallopian tubes were the less common sites of malignancy when compared to other sites of FGT. In the current study, the proportion of malignancy in these sites were reported to be 2.3%, 2.9% and 1.1% respectively of the total FGT malignancies. This finding suggests that cancer of vulva and vagina are not rare malignancies as determined in some studies.23, 24 In the current study, fallopian tube (1.1%) was the least common site of malignancy in FGT. This differs from a study in Nigeria which reported vagina to be the least prevalent cancer of the FGT.25

The cases of vaginal, vulval and fallopian tube malignancy were reported in the fifth decade onwards. The mean age of diagnosis in vagina was 57 years, vulva 54.5 years and fallopian tube 49.5 years. This was in accordance with the findings of Jamal et al20 who has reported these cases in the age group of 40-60 years.

Women with vaginal cancer and vulval cancer presented with ulcers and mass, similar to other studies. This differs from a study on vaginal cancer that reported bleeding per vaginum as the most frequent mode of presentation.26

In our study, squamous cell carcinoma constituted 60% cases of vulval and 75% cases of vaginal malignancy. This was in accordance with the findings of Platz et al22 who also reported SCC to be the most common malignancy of vulva and vagina constituting 74.4% and 70.8% respectively.

Although cancers of FGT are an important cause of morbidity and mortality among women worldwide; but there is significant lacunae in the FGT cancer detection programmes in India. So larger and more detailed study on the trends of FGT cancers is essential to plan better cancer detection strategies for specific age groups at risk.

U Beller Carcinoma of the vaginaInt J Gynaecol Obstet2003832739