Dharia, Mandal, Kondekar, Naik, and Gaikwad: A brief about autism spectrum disorders for nurses and other peripheral health workers

Autism spectrum disorder encompasses a wide range of neurodevelopment disabilities which affect children and their families across all sections of the society both in rural and urban settings. The prevalence of autism is rising irrespective of the socioeconomic background of the children. Hence every health worker has to be aware of ways to suspect and diagnose this condition and decide the appropriate treatment. Earliest intervention in autism spectrum disorder gives better results due to neuroplasticity. This article is targeted to help Medical officers, auxiliary nurse midwifes, anganwadi workers and other peripheral health workers by providing information on basics of ASD, normal speech development, simple ways for diagnosis and treatment for the same.

Autism is a neuro developmental disorder characterized by persistent deficits of social communication and interaction; restricted and repetitive behaviours, interests, activities.1 Many children show symptoms of autism by 12 months to 18 months of age or earlier, lacking imaginative play, poor interaction with peers and being particular about how their activities are conducted and so on.2, 3 Some children with autism reach their developmental milestones only to gradually regress later into autism.4, 5 Recently, according to a systematic review of the South Asian countries like India, Bangladesh and Sri Lanka population have reported a prevalence rate of 0.09 % to 1.07 % among children in the age group of 0 – 17 years with Autism Spectrum Disorders. This percentage translates into a large number for Indian Population which shows the importance of general awareness of ASD amongst nurses, peripheral health workers working under RBSK, Rashtriya Bal Swasthya Karyakram. RBSK is a national programme aiming at early identification and early intervention for children from birth to 18 years to cover 4 ‘D’s viz. Defects at birth, Deficiencies, Diseases, Development delays including disability.

It is important to understand the stages in the development of the brain beginning from neurogenesis till myelin formation. Studies have identified many processes including neural migration, maturation, synaptogenesis, pruning, myelin formation which take part in brain plasticity.6

Migration is an important step in development of various areas. It has been shown that in both humans and in experimental animals if there is abnormal migration then it leads to severe developmental malformations which are often linked to mental retardation and deficits in cognition.7 Migration is then followed by the dendritic growth and sometimes there is excessive growth which is being taken care by a process known as synaptic pruning using various range of experiences, epigenetic changes, environmental factors.6 These effects of pruning and cell loss translates into changing of cortical thickness. MRI studies have shown that children with normal or enhanced understanding of speech sounds have thickening of left inferior frontal cortex (roughly Broca’s area). Thus, the relation between behavioural development and cortical thickness is likely explanation for the variance in the development of skills like language in children.8 In infancy itself, the foundations of language are established and can be observed well before spoken language emerges.9 Thus, the earlier we can diagnose very minute developmental delays and work upon it by paying detailed attention, then it may help in better prognosis in case it turns out to be a developmental delayed child. When there is incoming auditory stimulus towards a child, the developing brain constructs acoustic maps of the sounds of its native language, thereby allowing the child to respond quickly to the native incoming language.10, 11 Neural plasticity as well as the exquisite sensitivity of the developing brain towards environmental cues are very crucial for the construction of these acoustic maps which play a major role in language construction and processing.12, 13 The accurate perception of rapid acoustic change in children is very important as the ability of the brain to decode the incoming speech is dependent upon this.14, 15, 16, 17 Unstable representation of sound and distorted neural boundaries can occur as a result of difficulties in biological encoding.18, 19

Stages of speech and language development

[i] *Doses need to be altered according to the age, weight and severity.

Red flags which might suggest for immediate speech and language evaluation 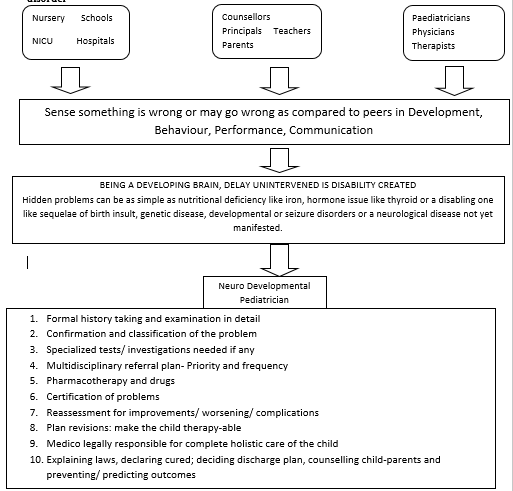 The diagnosis of ASD is dependent on detailed developmental history and behaviour. ASD is diagnosed according to the latest DSM V criteria. We have tried to present a simplified version of DSM V criteria at the end of the article. Parents are also educated about various red flags which can be seen according to various age groups and that should raise some suspicion. Some of the red flags have been also shown at the end. Children with autism spectrum disorder (ASD) can be oversensitive or under sensitive to stimuli such as noise, light, clothing or temperature or oversensitive to some sound frequencies and under sensitive to others.20 Some examples of different sensory sensitivities are that children might like bright colours, or squint when out in sunlight, like to feel different textures, or might sniff everything, or complain about smells, might not be able to stand being in noisy environments, or constantly need music on, might seem to ‘throw’ themselves across people, or stand on people’s toes, might move in poorly planned and uncoordinated ways, might ignore injuries or have delayed responses to injuries, or they might overreact to little hurts. Children with ASD often may repeat behaviours or have narrow, restricted interests which can affect eating habits and food choices and lead to health concerns. They can have limited food selection or strong food dislikes due to sensitivity to the taste, smell, colour and texture of foods and limit or totally avoid some foods or whole food groups. They also might not be eating enough food due to difficulty focusing on one task for an extended period of time and may be hard for a child to sit down and eat a meal from start to finish. The child’s limited food choices, low physical activity levels or medications can give rise to constipation. Constipation is also a result of faulty visceroception and manifests in many kids.

At peripheral rural and suburban areas mostly, screening of children of various age groups on the basis of various screening tools of language and speech development is done under RBSK (Rashtriya Bal Swasthya Karyakram,) a government scheme. There are two levels of screening in RBSK i.e. at community level and facility level. The community level screening will be conducted at Anganwadi Centres and Government and Government aided Schools by the Mobile health teams, while facility based new born screening occurs at public health facilities like PHCs / CHCs/ DH, by existing health manpower like Medical Officers, Staff Nurses & ANMs. After the initial step of screening of children, the next important step is confirmation of preliminary findings, support for referrals, treatment and follow up. Under RBSK, these activities are planned according to the age group of the child. The early intervention centres are established at the District Hospital level across the country as District Early Intervention Centres (DEIC) and the purpose of these DEIC is to provide referral support to children detected with developmental delays during specific screening, primarily for children up to 6 years of age group. A team consisting of Paediatrician, Medical officer, Staff Nurses, Paramedics should be engaged to provide services.21 Thus, it has become of paramount importance for all the health workers to acquaint themselves with the basics of ASD for early detection and proper referrals under these government schemes and systems.

Currently, there is no treatment to cure ASD, but as we call it a disorder, we attempt to put it in order. Several interventions have been developed which may reduce symptoms, help improve cognitive ability and daily living skills, and maximise the ability of the child to participate in the community.22, 23, 24, 25, 26, 27 Early interventions should be insisted even before the diagnosis and as early as 1 or 2 years of age, since in this period, a child's brain is still forming and is more "plastic" than at older ages. Hence, interventions and nutritional treatments may have a better chance of being effective in the longer term.28, 29

Early intervention often focuses on four key areas of children’s development: physical development, cognitive development, behavioural development and emotional development. There are ways but no structure as each kid may be likely to be stuck at different level, many therapies need to be individualised depending on the child’s response. Occupational therapy with behavioural applications does help with fine motor skills, play and self-help skills, sensory integration. Physiotherapy can help with motor skills like balance, sitting, crawling and walking. Speech therapy can help with development of speech, language, eating and drinking skills by providing constructional active input depending on the stage of speech deficit. They train them by exposing them to the same active stimulus repeatedly to improve their communication skills and vocabulary. Psychological therapy can help with forming relationships, coping with emotions and learning behaviours and skills. 30, 31 Risperidone and fluoxetine are some of the drugs which act as pharmacological therapy in ASD. Music therapy has proved to improve non-musical abilities such as communication, social and academic standards among individuals with ASD. Songs and chants lead to rhythm of speech and body movement which improve the non-verbal behaviours of ASD children and enhance social skills.

Behaviour therapy is the proven therapy practised all over the world but most of the occupational therapist and speech therapists do inculcate behaviour therapy tricks in their routine practice. So non availability of behavioural therapist in nearby area shouldn't discourage parents from starting any available therapies.

Home therapy measures play an important role for children with autism spectrum disorder can done by parents by spending extra time with children. They include reading story books for children and trying to show them and explain things going around them in a commentary manner. Parents should also try to improve their social skills and try to make the child independent enough to carry out their day to day activities. The child should be exposed to radio in order to improve their vocabulary and communication but however should be kept away from television and mobile. Radio as a medium of passive sound therapy instead of music will be more beneficial in understanding vocal sounds. Joint family children performed better language and social skills compared to nuclear and extended families.32 This indirectly explains the role of auditory stimulus in vocabulary development of child. However, studies have shown that there is a positive correlation between early onset, high frequency television /mobile/video/ games viewing and subsequent language development delay.33 Nutritional supplements like omega, carnosine, citicoline have also been tried.34, 35, 36

Autism Spectrum Disorders is a wide range of disorders which goes unrecognized in rural and peripheral settings. 37 Rising prevalence of autism due to various reasons and inability to cure makes many parents go for random approaches. A definite understanding and direction needs to be given to parents to be optimistic and also to not waste the early years of life by neglecting therapy and medical approach. History or evidence of age-inappropriate poor eye contact has been the consistent symptom in all autism kids at different ages. This should always raise an alarm as early as possible to start early intervention therapy and medication program as needed. This article compiles most of the basic information on Autism Spectrum Disorders and it may further help all the peripheral health workers in better screening and referral of children with developmental disabilities.

JF Werker RC Tees Speech perception as a window for understanding plasticity and commitment in language systems of the brainDev Psychobiol20054632335110.1002/dev.20060