Sharma, Kalra, and Pattanayak: Evaluation for cause of hematuria: Cracking the mystery

Evaluation for cause of hematuria: Cracking the mystery

Gross hematuria, besides being a serious renal disorder, is quite worrisome for the patients. It merits evaluation to determine the underlying cause and initiate timely management in order to prevent long term complications as well as permanent renal damage in some cases. Anatomical abnormalities causing gross hematuria are rare and often asymptomatic, hence not diagnosed routinely. Here we present two cases of gross hematuria with underlying anatomical abnormality known as the Nut Cracker Syndrome (NCS).

Gross hematuria in children usually portends a serious renal disorder and is worrisome for the patients’ parents. The cause of gross hematuria can be classified as glomerular or non-glomerular based on history and examination findings of color of urine, presence of casts, accompanying proteinuria, hypertension and other symptoms like flank pain, dysuria etc.1 Entrapment of the left renal vein (LRV) between the superior mesenteric artery (SMA) and aorta or between the aorta and vertebral column known as the Nutcracker syndrome (NCS) is a relatively uncommon cause of gross hematuria in children. Children with NCS usually have hematuria with pelvic or flank pain or painless gross hematuria.2 We present two patients who presented to the pediatric nephrology clinic of our centre with painless gross hematuria and were diagnosed to have NCS after thorough evaluation.3

Two boys, first a seven year old and second 9 years old, presented to us with recurrent gross hematuria for past 3-4 months. Both had history of episodic passage of red colored urine throughout the urinary stream lasting for 3-4 days each time followed by spontaneous clearing of the urinary color, with 2-3 such episodes every month, occasionally associated vague pain abdomen. There was no history of fever, burning micturition, skin rashes, edema, hematemesis or melena, edema with these episodes of hematuria in either of the children. There was no history of any drug intake, visual or hearing impairment and no family history of similar complaints or any renal disease. Physical examination of the children was unremarkable with office blood pressure records <50th centile for age. Hearing and visual assessment were also normal. They had normal renal function tests. Urine analysis of both the patients revealed numerous RBCs/ HPF with no dysmorphic RBCs, urine protein was negative on dipstick and urine protein creatinine ratio was as well as 24 hour urine protein excretion was within normal range. The urine calcium creatinine ratio was also normal. The urine analysis done on multiple occasions showed similar results with no evidence of significant proteinuria or hypercalciuria. The urine examination of asymptomatic parents and siblings of these patients was also unremarkable. Ultrasound of the kidneys and urinary bladder (USG KUB) child showed normal kidney sizes with no evidence of nephrocalcinosis, calculi or cysts and no gross abnormalities of the bladder. The investigations are as summarised in Table 1.

Summary of investigations of both the patients 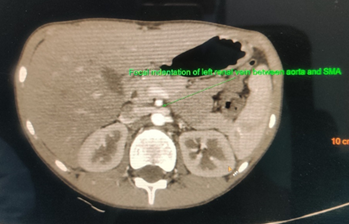 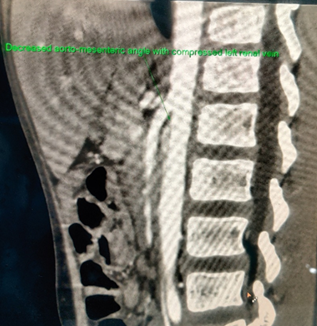 Gross hematuria in children can be due to various causes and it is imperative to identify the underlying etiology of the same by appropriate diagnostic workup and initiate timely management to prevent complications including irreversible renal damage. Passage of bright red urine usually points towards a non-glomerular etiology and is usually accompanied by dysuria or flank pain.1 The correct diagnosis of gross hematuria in children poses a unique challenge and requires a protocolised approach.1, 4

Nut cracker syndrome is suspected once the more common causes of gross non- glomerular hematuria like calculi have been excluded. The exact prevalence of NCS is not known as it may be asymptomatic in many cases. The Nutcracker phenomenon (NCP) or left renal vein entrapment refers to compression of the LRV between the abdominal aorta and proximal superior mesenteric artery. Posterior NCP has also been reported rarely due to compression of LRV between abdominal aorta and vertebral column. The term NCS is used if the LRV entrapment causes symptoms like hematuria, flank pain, orthostatic or frank proteinuria etc.2

Doppler ultrasonography (DUS) is highly sensitive and specific for diagnosis of NCS but if negative and diagnosis of NCS is strongly suspected based on the clinical findings, then it can be confirmed by computed tomography angiography (CTA) or magnetic resonance angiography (MRA) and rarely retrograde venography. “The beak sign” on CTA and LRV diameter ratio (hilar to- -aorto-mesenteric ratio) > 4.9 have been reported to have very good diagnostic accuracy. Similar findings on MRA have also been reported to be highly accurate in diagnosis of NCS and preferred as it avoids the radiation exposure of CTA.5, 6

In pediatric and adolescent patients conservative approach is preferred as complete resolution of symptoms is seen in majority of patients over a mean follow-up of 26 months. This has been attributed mainly to increase in intra-abdominal and fibrous tissue at the SMA origin with weight gain in these patients, reducing the entrapment of the LRV. This may also be in part due to development of venous collaterals which reduces the LRV hypertension. Medical management includes chiefly Angiotensinogen inhibitors (ACEi) for orthostatic proteinuria and Ecosprin for improving renal perfusion.5, 7 Endovascular stenting and surgical management including open or laproscopic LRV transposition and autotransplantation is reserved for patients for non-resolution of symptoms.5, 7

Recurrent gross hematuria in children merits detailed evaluation for the underlying cause. NCS causing hematuria remains a diagnosis of exclusion, as it may be asymptomatic and may be incidentally picked up in many patients. However, it is important to identify this anatomical abnormality in a symptomatic patient after ruling out the common causes. Though it is a benign and self-limiting disease, the patients should be followed up till complete resolution of hematuria.