John: The epidemiology and examination of clinical outcomes in children with COVID-19: A research overview

The epidemiology and examination of clinical outcomes in children with COVID-19: A research overview

Introduction: COVID- 19 pandemic has affected hundreds of thousands of people worldwide, and so far, accounted for 0.39-12.3% of affected disease population. Even though a large number of studies have reviewed symptoms and characteristics of adults with COVID-19, only some of them have included a smaller number of children.

Materials and Methods: A literature review was conducted through online sources of data base available in the internet. Studies published from Jan 2020 up to September 2021 were included.

Results: The organism causing infection was the novel Corona virus (SARS-CoV-2). In children, almost 0.39-12.3% of the population was affected. A slight predominance of boys vs. girls was noted, but it was not statistically significant. The incubation period ranged from 2-14 days. Nearly 51% of children were presenting with mild disease and nearly 4% were asymptomatic. The children also presented with non-respiratory symptoms, but the exact figures were not available. Multisystem inflammatory response was the most common reported complication.

Conclusion: Current findings indicate that children have a lower incidence of the disease, with milder predominance and better prognosis, but prolonged shedding of virus in the nasal and stools sample and being asymptomatic raises a concern of community transmission.

COVID- 19 pandemic or Coronavirus disease 2019, had threatened the whole world by causing catastrophic major public health crisis, and had affected hundreds of thousands of people worldwide, but data on how it affects children are rare.1, 2 Children have so far accounted for 0.39 -12.3% of affected disease population.3 As per the reports, in Wales, a 3-day old baby died after his mother tested positive with COVID & in Connecticut, a 6-week old infant died of complications related to the disease.4 In India, a 20-day old infant died of septicemia in Mumbai was the youngest death reported so far,5 and recently in May 2021, a 39-day old baby boy died in Kerala with COVID-19.6 Even though a large number of studies have reviewed symptoms and characteristics of adults with COVID-19, only some of them have included a smaller number of children.7 Transmission of disease can occur from direct inhalation of droplets, which are shed from the infected person through coughing or sneezing, as well as direct contact with surfaces and fomites soiled by infected respiratory secretions.8 The virus can survive on the contaminated surfaces for few hours to few days, which is comparatively lower at higher temperatures and low humidity conditions, with an average incubation period of 5-6 days.9, 10

Purpose of the Study

The Coronaviruses (CoVs) belong to a large family of Zoonotic RNA viruses, which appear as enveloped and single stranded viruses. The commonly infecting CoVs among humans are: HCoV2-229E, -HKU1, -NL63 and -OC43. The CoVs have the capability of rapid mutating ability and recombination, thus can lead to novel CoVs, and can spread from animals to humans. The novel CoVs which caused an outbreak among humans in severe acute respiratory syndrome (SARS-CoV) in 2002 and Middle East Respiratory syndrome corona virus (Mers-CoV) in 2012 first reported in China and Saudi Arabia respectively. The SARS-CoV-2, or COVID-19, is the novel corona virus first appeared in 2019 December in China, and thereafter in many other countries, had caused such a massive destruction to the lives of humans and currently causing the pandemic.11

The average range of incubation period reported with SARS-CoV-2 infection is 5-7 days in children and 2-14 days in young adolescents. 12

Children under 1 year of age had reported as the highly affected population with COVID-19, with 39.3% of the reported cases (Figure 1). 13 Male children showed a slightly higher predominance of affected population compared to girls, with 56.6% and 43.4% respectively. 14, 15 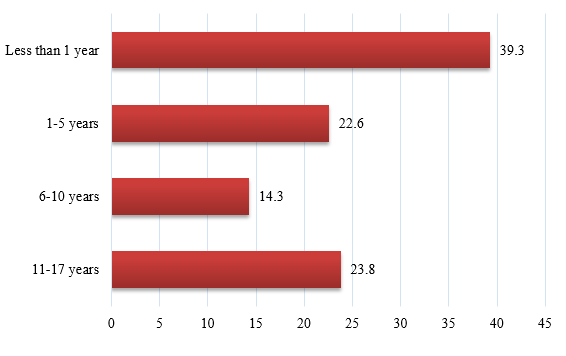 The major route of transmission in reported studies included the respiratory route, through droplets or droplet contaminated surfaces. Fecal-oral transmission is also reported, and especially a causative factor responsible for human spread of infection, with prolonged viral shedding reported even when the nasopharyngeal swab is tested negative for pediatric patients.16 In another study involving pediatric SARS-CoV-2 infection, all children had positive stool RT-PCR results after 10 days, without positive throat swabs, clinical symptoms or imaging findings.17 Rare or not reported routes of transmission are vertical transmission, cord blood, breast milk, nosocomial transmission, and ocular transmission.18, 19 The virus propagation occurs by means of community and intrafamilial spread, with family clusters being the commonest mode of spread of infection (90%). In familial spread, 76.6% of the spread occurs through confirmed family members and 13.5% occurs through suspected family members, whereas 8.8% and 1.2% of the infection spreads through unidentified source of infection and contact with other suspected cases respectively.18, 20

Clinical presentation and signs and symptoms

Majority of children brought to the hospital presented with respiratory symptoms (65%), with 51% presenting with mild form of the disease. Almost 39% of children presented with moderate symptoms, 5% with severe disease, 4% being asymptomatic and 1% with critical disease condition. 14, 21 The common signs and symptoms presented in children is given in Figure 2, and the data is highly variable in reported studies.22 Initial non-respiratory symptoms commonly reported in children included abdominal pain (4.4%), vomiting (6.4%), poor appetite (32.8%), and diarrhea (8.8%), whereas the percentages were not available for symptoms like raspberry jelly stools (with blood), convulsions, drowsiness, conjunctivitis/eyelid dermatitis, but these figures are highly variable.23

The Common signs and symptoms presented in children with COVID-19 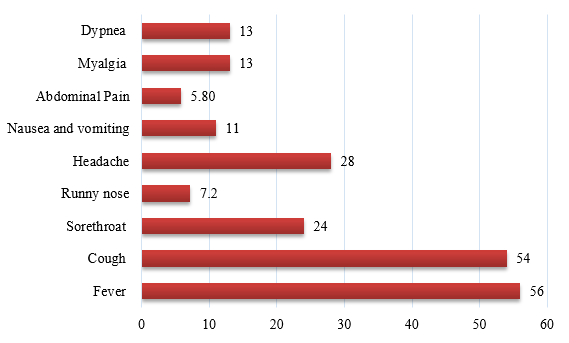 Preliminary evidence reported from research studies suggests a lower risk for severe forms of the disease and experience a mild disease for those who tested positive for COVID-19.11, 24, 26 The exact cause for these remains elusive, but could be related to many factors.11, 24 In general, the immune systems of children and adults are different, with regard to its composition and functional responsiveness, and that children can have a qualitatively different response to the SARS-CoV-2 virus compared to adults.27 Strong innate immune response can be attributed to have a protective effect in infants due to immune training,21, 24, 25, 26 which is secondary to live-vaccines and frequent viral infections. The presence of other viruses in the mucosa of lungs and airways of children is also thought to limit the growth of SARS-CoV-2 by direct virus-to virus interactions and competition.28 It is also recognized that the alveolar epithelial cells have a greater regenerative capacity in children.22 Moreover, children have a difference in the expression of angiotensin converting enzyme 2 receptor (ACE2), expressed in the airways, lungs and intestines, which is essential for the binding and infection of SARS-CoV-2. In adults, treatment with ACE inhibitors or angiotensin receptor blockers induces expression of ACE2, and leads to an elevated level, causing worse outcomes in adults infected with SARS-CoV-2. 24, 25, 29, 30 Children also has absence of risks like smoking, obesity, and comorbidities, which could also affect the way the disease is expressed in them, often limiting with a milder form of the disease. 1, 24

The main limitation of this review article is the limitation in the empirical data collected from large-scale multicenter studies. Few of the studies in this review had reported with a small sample size and the data was obtained mainly from children who had been reported with symptoms, or have been laboratory tested. Also, there was a large variation in the data reported from time to time from various countries which made it difficult to present the findings.

Current findings indicate that children have a lower incidence of the disease, with a milder predominance. Most of the children recovered within 1-2 weeks after the onset of symptoms. Massive serological testing for SARS-CoV-2 will enable to more realistically assess the role of asymptomatic children in disease transmission. Prolonged shedding of virus in nasal and stool secretion has substantial implication for community spread in child-care centers, schools and homes.

Author would like to declare that there are no conflicts of interest in this study and no funding had been received to carry out the research.

A child confirmed COVID-19 with only symptoms of conjunctivitis and eyelid dermatitis [Internet]. [cited 2021 Sep 10]https://www.ncbi.nlm.nih.gov/pmc/articles/PMC7181963/