A study to assess the knowledge and practices related to menstruation and menstrual hygiene among adolescent girls of selected school of District Ambala, Haryana

Background:  Menarche, among Adolescence girls, signifies the adaptation to womanhood as it is associated with pubertal changes and beginning of the capacity to reproduce. This is a period of gonadal development and growth spurt. Menstrual hygiene is crucial to healthy reproductive system and in return to good physical health and wellbeing. Therefore, enhanced awareness regarding menstruation and related hygiene, right from adolescence may escalate safe practices that are helpful in alleviating the distress of millions of women.

Aim: To assess the knowledge and practices related to menstruation and menstrual hygiene among adolescent girls of selected schools of District Ambala, Haryana

Settings and Design: A descriptive cross sectional study was conducted in selected schools of Mullana and Barara District Ambala, Haryana.

Materials and Methods: Total enumeration sampling technique was used to enroll 192 adolescent girls from class 9th to class 12th from selected schools after obtaining written informed consent from parents and verbal consent from girls. Ethical clearance was obtained from Institute Ethics committee. Doubts of the participants were cleared after data collection.

Conclusion: There is a need to implement an education program for adolescent girls on menstruation and menstrual hygiene to ensure healthy menstrual practices.

Menstrual cycle is a unique natural phenomenon to females. It happens in a predictable pattern, during month. It starts at puberty and continues until the menopause. Certain body hormones rise and fall during the month, causing the menstrual cycle to occur. At age of 15 years, 98% of females usually have had menarche.Menstrual hygiene has been an issue of concern worldwide especially in developing nations. Social, cultural and religious factors have an impact on adjustment to menstrual hygiene. There are number of myths, misconceptions, superstitions and cultural and/or religious taboos concerning menstrual blood and menstrual hygiene, for instance in Jewish, menstruating women and everything they touch is considered to be impure. In Hindus, menstruation is considered as dirty and restrictions during menses is linked to auspiciousness and positivity.1, 2 In certain tribes of Nigeria, menstruating women must isolate themselves in menstruation huts, because they believed that menstrual blood pollutes the home.3 Such taboos have a major impact on mentality, lifestyle, emotional state, and most importantly, health of women.4

The factors influencing menstrual hygiene also include socio-economic status, environmental constraints, humiliation and stress, lack of knowledge, lack of facilities such as water, menstrual stigma, gender norms bathroom and privacy.5, 6 One of the studies from Saudi has reported that girls get limited knowledge from their mothers, sisters and from religious books. A study found that 71% of girls in India report having no knowledge of menstruation before their first period.7 National Family Health Survey 2015-2016 estimates that only 36 percent women are using sanitary napkins. Many girls use unhygienic undried rags and clothes.8

To assess the knowledge and practices related to menstruation and menstrual hygiene among adolescent girls of selected schools of District Ambala, Haryana

A descriptive cross sectional study with non experimental research approach was conducted in selected schools of Mullana and Barara of District Ambala, to assess the knowledge and practices related to menstruation hygiene among adolescent girls. Ethical clearance was obtained from Institute Ethics Committee and permission to conduct research was obtained from the Head of schools. Written Informed consent was obtained from parents after providing detailed parent information sheet to them. Data was collected using self structured questionnaire which was validated by 9 experts from the same field.

The tool was given to 9 experts in the field of Nursing for validation. The calculated Content Validity Index (CVI) was 0.87. The questionnaire consisted of socio-demographic profile, knowledge of adolescent girls regarding the menstrual hygiene and practices related to menstrual hygiene. Total enumeration sampling technique was used to enroll 192 adolescent girls from class 9th to 12th of selected schools. The girls who were willing to participate, and were able to understand either Hindi or English or Punjabi were included. The girls who did not achieve menarche or were having amenorrhoea for more than three months were excluded. Participants were made to sit in a separate room so that they can feel comfortable and privacy was ensured. The questionnaires were distributed and 45 minutes were provided to complete the questionnaire. Data collection was terminated after clearing all the doubts of participants. Data obtained was coded and was analyzed using descriptive and inferential statistics by statistical package for the social sciences (SPSS)-16.

Socio-demographic variables of adolescent girls and their mothers N=192

Knowledge and source of information regarding Menstruation and Menstrual Hygiene

Practices of Adolescent Girls regarding Menstruation and Menstrual Hygiene. N=192

Knowledge and source of information regarding Menstruation and Menstrual Hygiene

Most of girls 130 (67.7%) were getting the information regarding menstruation from their mother whereas 36 (18.55) girls were getting information from their sister, few 5 (2.6%) from their fathers, 3 (1.5%) from friends, very few (0.5%) were getting information from books (Figure 3). Source of information regarding menstrual hygiene was T.V, news papers, internet, library for nearly half 85 (44.3%) girls (Figure 4). Menstruation was identified as a physiological process by more than half 120 (62.5%) girls whereas 46 (24%) girls reported it as pathological process, few 19 (9.9%) girls said it a curse and very few i.e. 7(3.6%) reported it as an abnormality. Nearly half 93 (44. 4%) girls were aware of meaning of menstrual hygiene i.e. cleaning perineal area during menses, using sanitary pads, proper disposal of pads, all are part of menstrual hygiene. Content of menstrual flow was correctly reported by one fourth 56 (29.2%) girls that it is dead cells, blood and ovum, mucus and endometrial lining 77 (40.1%) girls correctly responded that itching, abnormal smelling vaginal discharge and infection and all are common symptoms of poor menstrual hygien. Advantages of menstrual hygiene were correctly reported by nearly half 93 (48.4%) girls. One fourth of 47 (24.5%) girls correctly responded that cleaning of perineum, it should be done every time after passing urine (Table 2).

More than half 112 (63.5%) girls reported sexual activity is safe to perform during menses (Table 2).

Menstrual profile of the adolescent girls. 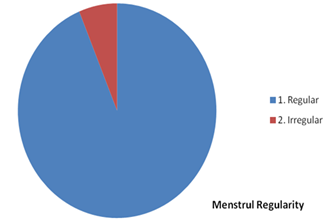 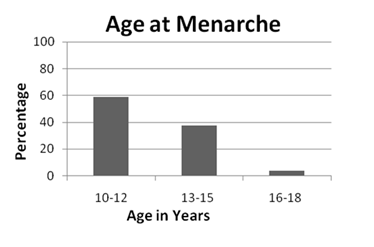 Source of information regarding menstruation 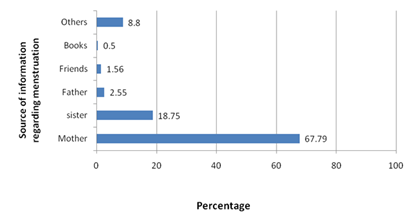 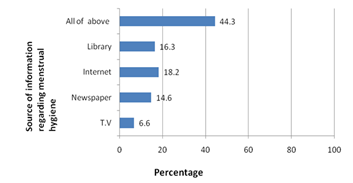 Practices of adolescent girls regarding menstruation and menstrual hygiene

Various studies have reported use of boiled and dried cloths rags torn from old saris, sanitary pads and tampons during menstruation. National family health survey reported that girls used cloth followed by sanitary pads and locally prepared napkins. Whereas, in the present study girls preferred using sanitary pads however difficulty to procure pads was also reported, and same was reported in report of NFHS-4.13 According to latest data by Ministry of Health only 12% of women have access to sanitary nepkins in India therefore they have to rely non unhygieninc and outdated methods.13 Another study conducted in South region of India revealed that, women and girls in poor countries cannot afford to change pads around four times a day during menstruation. Instead, the vast majority of women and girls used rags. These were usually torn from old saris.14 Similarly in the present study use of cotton and cloth during menstruation was reported.

In the present study, girls were aware about menstruation and believed it is a physiological process. The results were similar to metaanalysis and systematic review on menstrual hygiene in which half of the girls considered it normal process.11 Another study on perineal hygiene reported use of both soap and water for the cleaning of perineum during menstruation but in present study more girls used only water to clean perineum followed by soap and water.15, 16

The study results revealed that the adolescent girls were having lack of knowledge regarding menstruation and menstrual hygiene and were following inadequate practices regarding the same. These findings of study were mind boggling and are suggestive of a need to conduct a research to assess the effectiveness of some strategies to improve knowledge and practices of adolescent girls regarding menstruation and menstrual hygiene so that infection can be prevented. Awareness raising programmes, health personnel, enthusiastic school teachers and knowledgeable mothers can play a prominent role in communicating the crucial message of maintaining proper menstrual hygiene to the adolescent girl of today.