Jagruthi, Gobbur, Sajjan, and Kalyanshettar: An unusual cause for neck rigidity?

An unusual cause for neck rigidity?

Otogenic tetanus is a subtype of cephalic tetanus, limited to the head & neck, but can progress to a more generalized form. Caused by the spore-forming bacillus, Clostridium tetani, It produces a potent toxin, tetanospasmin, preventing inhibitory neurotransmitters' release, hence causing rigidity.

To highlight the uncommon cause of high fever and neck stiffness.

A 10-year-old girl, Miss L, came to our hospital with a high-grade fever, neck stiffness & epigastric pain for eight days. She also had right-sided ear discharge intermittently for the last seven years, aggravated by upper respiratory infection episodes. The child had difficulty in flexing her neck, not associated with any aggravating or relieving factors. She also had a high-grade fever and headache. There was no history suggestive of vomiting, nausea, weight loss, or loss of appetite. She was previously seen by multiple physicians who managed her as a case of otitis media clinically.

At admission, the child was irritable; right ear examination revealed ear discharge, profuse, mucopurulent, non-foul smelling, non-blood tinged. The tympanic membrane showed no perforation. There was no mastoid tenderness or tragal tenderness with limited mouth opening. The child had trismus, but oral cavity examination revealed no palatopharyngeal lesions (e.g., retropharyngeal abscess). The spatula test was positive. She also had risus sardonicus. Systemic examination was unremarkable, except for neck rigidity and opisthotonus. The child was admitted, and blood samples were sent for investigations, including serum calcium (within normal limits), ear swab for Gram stain (Gram-positive cocci). We performed a lumbar puncture, the cerebrospinal fluid collected and analyzed because of suspicion of meningitis, but the CSF was normal. Aerobic and anaerobic culture of the ear swab was sterile, a CT scan of the brain was done, which incidentally revealed bilateral otomastoiditis.

The child was started on broad-spectrum antibiotics, but the condition did not improve clinically in 48 hrs. However, the spatula test was positive. Based on this fact, otogenic tetanus was diagnosed. The child was given tetanus toxoid and tetanus immunoglobulin, both intramuscularly and intrathecally. IV antibiotics AMPICLOX and Metronidazole were given for ten days. She gradually showed an improvement, discharged after ten days. Parents were counseled about the need for immunization, and her parents & siblings were immunized with Td vaccine as a precaution, in case they were not fully immunized.

Clinical picture of the child before immunoglobulin administration 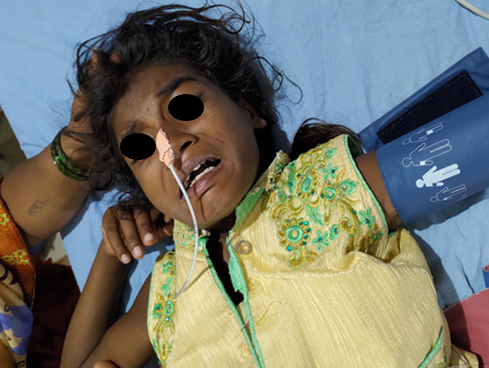 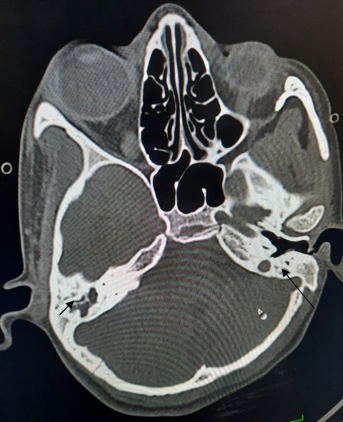 Clinical picture of the child after immunoglobulin administration. The child can open her mouth completely– trismus is the first sign to appear and the last sign to disappear, seen in this picture. 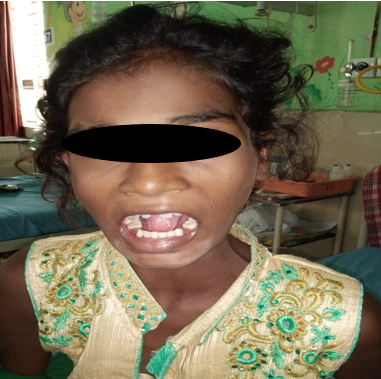 Otogenic tetanus was first reported in 1934 by Hyman & Bower.1 It is caused by C.tetani. Tetanus is linked to socioeconomic & cultural factors and personal, environmental hygiene, and lack of awareness of prompt treatment of ear infections.2 Since childhood vaccination does not confer lifelong protection, it is advisable for adolescents and adults to receive booster doses.

Otogenic tetanus is a subtype of cephalic tetanus, which affects the head and neck, but can progress to a more generalized form. It produces a toxin, tetanospasmin, which prevents the release of inhibitory neurotransmitters, causing rigidity & spasms. Otogenic tetanus is managed conservatively; patients are isolated to avoid light, noise, and other stimuli that provoke muscle spasm. Tetanus immunoglobulin is usually given in a dose ranging from 1500-3000 IU. Intrathecal tetanus immunoglobulin has been tried by several workers in India & abroad.3, 4, 5, 6, 7 In a study conducted by Ramachandran et al.,6 it has been shown that intrathecal administration of tetanus immunoglobulin of 250IU is effective & safe in the management of tetanus.5, 6 Parents and attenders are to be counseled about vaccination.

Neck stiffness is an important finding to diagnose meningitis, but careful examination reveals other causes of neck stiffness like tetanus in our case. Tetanus except in the newborn should have zero mortality if diagnosed before complications like aspiration occur.

N Ramachandran A Comparative Study of Different Regimens in the Management of Tetanus with Special Reference to Intrathecal Serotherapy, Thesis for MD Pediatrics, University of Calicut1982