Mahishma. K, Sandeep, and Hadi: A rare case of Diastematomyelia with syrinx and tethered cord in a newborn

Diastematomyelia or Split cord syndrome is a rare form of spinal dysraphism characterized by longitudinal splitting of spinal cord, conus medullaris or filum terminale to a variable extent. Presence of SCM is suggested by certain superficial markers like skin pigmentation, hemangioma, lipoma, dermal sinus and hypertrichosis. Meningocele or myelomenigocele may also be present. Affected children usually present with progressive sensorimotor symptoms and bowel and bladder dysfunction. Development of sensorimotor symptoms and progressive loss of function emphasis the need for antenatal diagnosis of the spinal deformities which paves way for early intervention and management thus minimizing the morbidity.

Diastematomyelia or Split cord syndrome is a rare form of spinal dysraphism characterized by longitudinal splitting of spinal cord, conus medullaris or filum terminale to a variable extent. The two hemicords are separated by a bony, fibrous or cartilaginous septum. Patients with split cord malformations may be neurological normal or may develop proggressive motor or sensory deficits with loss of bladder and bowel function. 90% of these are associated with cutaneous manifestations of dysraphism, commonly being large hairy midline patches.

A baby girl born at term to a first gravid mother was found to have bluish discoloration of skin over the dorsal spine and a sacral dimple above the gluteal folds. Antenatal period was uneventful and the mother did not consume any drugs. There was no history of previous miscarriages. On examination, there were no swellings or hemangiomas or hypertrichosis over the back. No other congenital anomalies were found. Neurological examination and reflexes were normal. Baby weighed 2.8 kg and her head circumference was 34 cm. An ultrasonography of spine was done. It showed splitting of the spinal cord in the thoraco-lumbar region(Figure 1). Neurosonogram was normal. Ventricles were normal. Visualised cerebellar hemispheres and vermis were relatively normal. There was no bony spur on X- ray. An MRI of spine was performed to confirm the type of split cord malformation (Figure 2. T2 coronal view showing both cords). A syrinx was found at D8 level below which the spinal cord split into two hemicords (Figure 3 T2 saggital image showing focal syrinx with low lying tethered cord). They are seen to fuse at L4 level (Figure 4 showing fusion of the cords). The hemicords were seen to lie within the same dural sac. Filum terminale was thickened and the cord was low lying. Cervical and dorsal spines above the level of D8 were normal. A final diagnosis of type II SCM of dorsolumbar spine with hydromyelia and tethered cord was made. 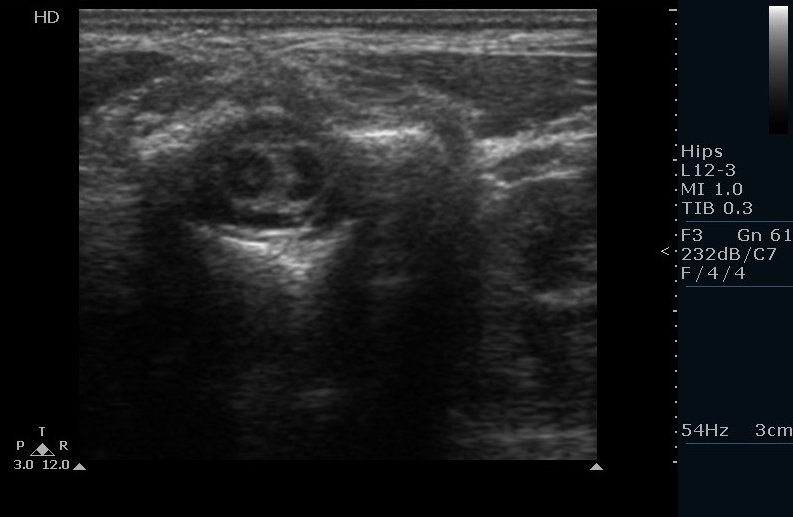 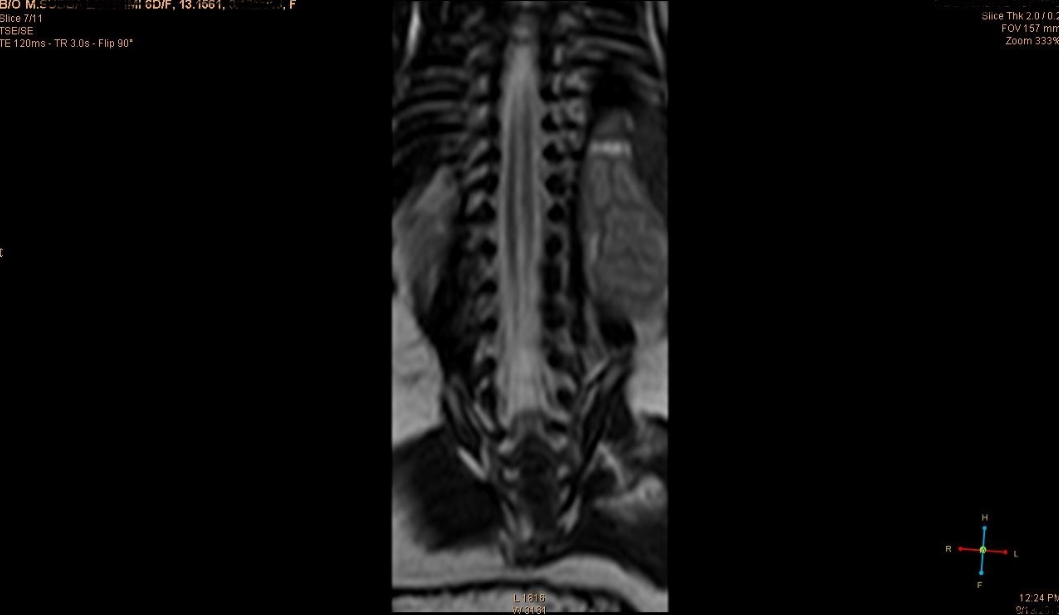 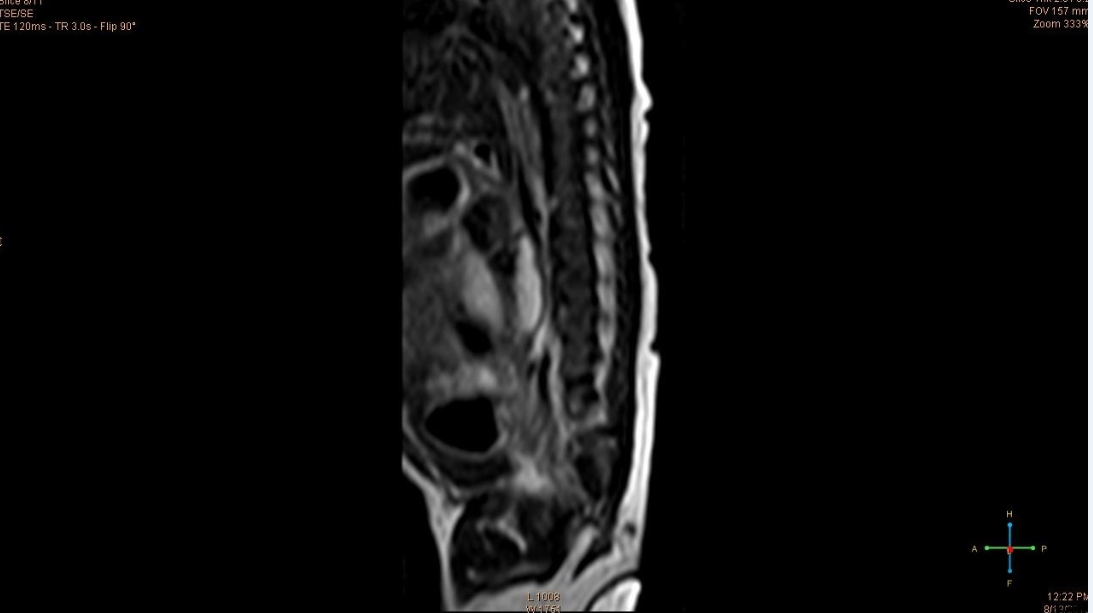 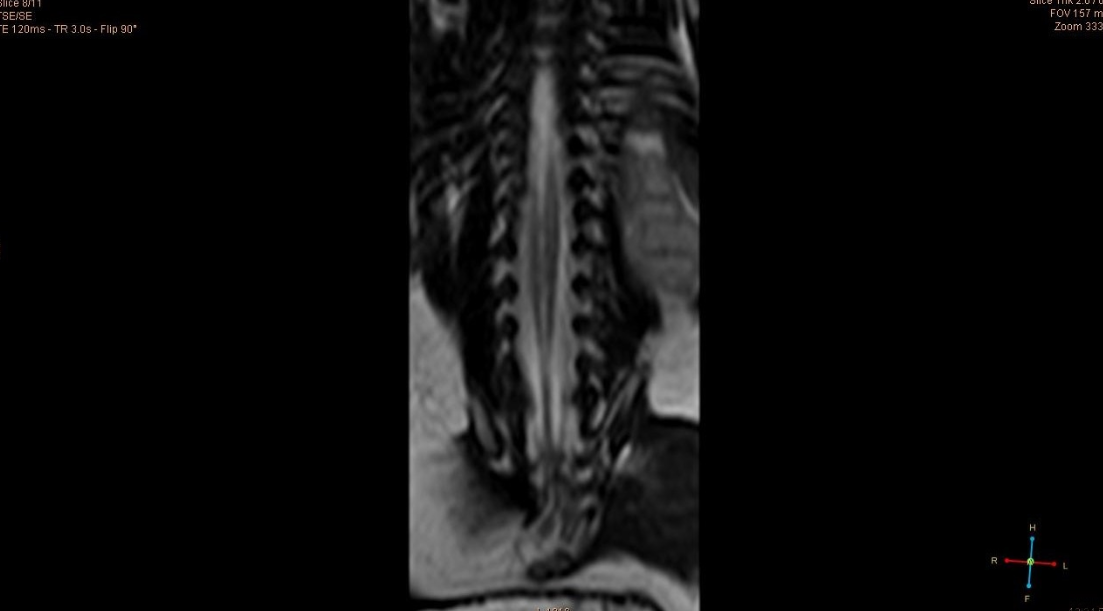 Diastematomyelia is a form of occult spinal dysraphism. There is vertical splitting of the spinal cord into two hemicords. The outer half of the spinal cord is normal while the medial half is extremely underdeveloped.1 Its closest differential diagnosis is diplomyelia. Diplomyelia is true duplication of the spinal cord, rather than splitting. Presence of two dural sacs, two pairs of anterior and posterior nerve roots distinguishes it from diastematomyelia. To overcome this confusion between the two conditions, Pang proposed a classification for double cord malformations based on radiological and surgical features. He also recommended the term Split Cord Malformations (SCM) for all double spinal cord.2 Type I SCM consists of two hemicords. Each hemicord has its own dural tube and the two are separated by a rigid osseocartilagenous septum. Type II SCM has the two hemicords in a single dural tube separated by a non-rigid fibrous septum. Differentiation into type I and II is important as type I SCMs are more difficult to correct and are associated with more surgical morbidity than type II, especially if there is an oblique septum dividing the cord.3 A case of triple splitting of the cord has also been reported.4

There are many theories regarding the embryology of SCM. One theory suggests that continued infolding of the neural tube leads to the split cord and the resultant cleft is filled by mesodermal tissue. This theory is compatible with the absence of septum in some cases.5 The unified theory of embryogenesis by Pang D et al proposes that all types of SCMs have a common embryogenetic mechanism, which is, formation of adhesions between ectoderm and endoderm around which an endomesenchymal tract forms that divides the developing notochord in to two and causes formation of two hemineural plates.

SCMs are more common among females than in males, the ratio being 1.3:1.6 The most common location is thoraco-lumbar. However, it can also affect the cervico-dorsal region. Lumbar SCMs have a higher chance low-lying cord than cervical or high thoracic SCMs. Presence of SCM is suggested by certain superficial markers like skin pigmentation, hemangioma, lipoma, dermal sinus and hypertrichosis. Meningocele or myelomenigocele may also be present. Hypertrichosis is the best predictor of an underlying SCM and it is found in 60 percent of the cases. Type I SCMs in addition to a duplicated dural sac also have a midline bony spur. Hydromelia is also common. There may be associated vertebral anomalies like hemivertebrae, kyphosis and scoliosis. Renal, rectal and uterine malformations have also been reported.7 The affected children are usually symptomatic. Type II on the other hand, has no bony spur or septum. Hydromyelia is not always seen. They may even remain asymptomatic. Affected children usually present with progressive sensorimotor symptoms and bowel and bladder dysfunction. A study conducted in AIIMS showed the prevalence of motor and sensory deficits to be 80% and 70% respectively. Scoliosis and foot deformities were also reported.8 Back pain is a common symptom in adolescents but is uncommon in children. Diagnosis is suspected from characteristic bony changes like multiple level spina bifida, anteroposterior narrowing of the vertebral bodies with widening of interpedicular distance, and narrowed disc spaces with fusion of adjacent laminae.

In our patient, the diagnosis was missed antenatally. This emphasizes the need for prenatal knowledge of spinal cord anomalies. Any mother with suspected fetal spinal anomalies should therefore be subjected to fetal MRI to plan further management.

The treatment of SCM is surgical. Aim of the treatment is to release the spinal cord to move freely with the movement of the spine. In type I SCM the two cords are in separate dural sacs with a medial attachment to dura and bony septum. Thus, the dura is opened,bony septum removed, medial attachments to dura are lysed,and a single cord is created. In type II lesions, membraneous septum is lysed and an attachment of this membrane to the anterior dura is also explored and lysed. As retethering of the cord is rare in this type, the pial layer of the cord is not disrupted.

A study on the post operative prognosis indicated that prophylactic surgeries were associated with better clinical outcomes and those with established preoperative neurological deficits persisted with residual deficits. The associated syringomyelia persisted postoperatively indicating that it does not contribute to the neurological syndrome.9

El Emad Sadek Shatla M A Said Ashraf Bedair Soliman A Sacral Mass in a newborn: A Variant of Type II Diastematomyelia with Triple Splitting of the CordCase Rep Pediatr201310.1155/2013/307205