Tolosa-Hunt Syndrome is characterised by headache and ophthalmoplegia due to involvement of third, fourth, sixth cranial nerve. The exact aetiology is not known. MRI brain is diagnostic test of choice. Treatment is mainly using corticosteroids. Prognosis is good with rapid recovery from headache and opthalmoplegia. There are only few case reports Tolosa-Hunt Syndrome in children.

Tolosa-Hunt Syndrome (TTS) is characterised by headache and ophthalmoplegia due to involvement of third, fourth, sixth cranial nerve and sometimes ophthalmic branch of fifth cranial nerve.1 The exact aetiology of THS is not known. Treatment is mainly using corticosteroids. There are only few case reports of THS in children. We are presenting a case of THS in a 12-year-old girl.

A twelve-year-old girl, developmentally normal, immunized for age presented with headache of 7 days duration and vomiting of two days. Headache was of severe type, disturbing her sleep and daily activities. Headache was mainly over forehead. Next day, she developed double vision and drooping of eyelid of the left eye.

O/E: Child was fully conscious and active. Vitals were stable. No neuro cutaneous markers. Her all anthropometric measurements were normal.

On nervous system examination: She was fully conscious and oriented. There was ptosis on left side with restricted lateral eye movement on the same side. She was also having decreased adduction on left side. Fundus exam was normal. No nystagmus. Pupils showed normal response. All other cranial nerves were normal. No focal deficits or sensory loss. No signs of meningeal irritation.

On investigation, her Hb was 12.7. Total leucocyte count was 17,300/mm3. Her ESR was 90mm/hr. Normal RFT and LFT. ANA and anti MPO antibody were negative. Sputum examination negative for evidence of tuberculosis. HIV and VDRL tests were non-reactive. 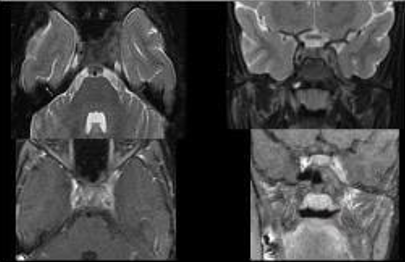 Patient was started with intravenous dexamethasone for initial 4 days, followed by oral prednisolone (1mg/kg) for four weeks and then tapered slowly. Patient responded well to the treatment. Headache subsided within 24 hrs of treatment. After 2 days her diploplia improved. On fifth day ptosis also disappeared with normal eye movements in all directions. On follow up after 2 months, she was asymptomatic.

On the basis of history, typical clinical features after excluding other possibilities and based on MRI findings and quick response to steroid, a diagnosis of Tolosa Hunt syndrome was made.

Tolosa-Hunt syndrome is characterised by periorbital or hemicranial headache with varying degrees of opthalmoplegia. Various combinations of cranial nerve involvement including ophthalmic division of fifth nerve localizing the lesion to the cavernous sinus or superior orbital fissure. It is necessary to exclude all other causes like trauma, neoplasm, aneurysm and inflammation in a case of THS. Dramatic response to steroid and characteristic MRI findings are also included in the criteria.

Tolosa described the syndrome 70 years back with headache, opthlamoplegia and reduced sensation over the ophthalmic division of trigeminal nerve. Later it was found to be due to granulomatous inflammation of cavernous sinus.1 Hunt described similar lesion independently, 7 years later.2

Clinical features last for days to weeks and remit spontaneously but rarely recur at intervals of months or years. Recurrences happen in 50% of cases and may be ipsilateral, contralateral, or rarely, bilateral cranial nerve palsy.4 Very good response to steroid as in our case , is very characteristic. Smith and Taxdal were the first to apply the eponym “Tolosa-Hunt syndrome” and described utility of “steroid as a diagnosic test”.5

The disorder is rare during the first 2 decades of life and there are only very few case reports described in children.6, 7 Incidence is equal in both sex. The aetiology of Tolosa-Hunt syndrome remains unknown. What triggers the inflammatory process in the region of the cavernous sinus/superior orbital fissure is not known. It seems that the syndrome falls within the range of idiopathic orbital inflammation.8

Pathologically, Tolosa originally described non-specific, chronic inflammation with proliferation of fibroblasts and infiltration of the septa and wall of the cavernous sinus with lymphocytes and plasma cells. Subsequent reports have shown granulomatous inflammation, with epithelioid cells and occasional giant cells.2, 9

Contrast enhanced MRI in coronal sections, is the most valuable diagnostic study. An area of abnormal soft tissue in the region of the cavernous sinus in most, but not all, patients with THS is seen. Typically, the abnormality is seen as an intermediate signal intensity on T1 images, consistent with an inflammatory process. With corticosteroid therapy, signal intensity will reverse in most reported cases.10 The major limitation of MRI findings in THS is their lack of specificity.

THS is a diagnosis by exclusion. Investigation to rule out tumour, vascular causes, or other forms of inflammation in the region of the cavernous sinus/superiorrbital fissure may be needed. Occasional reports have documented a raised erythrocyte sedimentation rate and leukocytosis in the acute stage of Tolosa-Hunt syndrome.11 In this case also there was leucocytosis with high ESR.

Spontaneous remission is reported even before use of steroids, but steroid hastens the recovery. Headache subsides within 24hr of treatment with steroid. For refractory cases, azathioprine, methotrexate, or radiation therapy has been employed.12 Because the diagnosis of THS is often made clinically, strict follow up must be maintained for the possibility of alternative masquerading diagnosis.

THS should be suspected in all cases of headache and opthalmoplegia. One has to rule out any other specific cause for similar pathology. MRI is the diagnostic test. Sterioid is the drug of choice. THS has good prognosis even though rarely it may recur.

E Tolosa Periarteritic lesions of the carotid siphon with the clinical features of a carotid infraclinoid aneurysmJ Neurol Neurosurg Psychiatry1954174300210.1136/jnnp.17.4.300