Kesavan, Anees C A, and Aparna V E: Arteriovenous malformations in the basal ganglia and thalamus - A rare case of recurrent stroke

Stroke is rare in children when compare to adults. The aetiology, clinical presentation and outcome of stroke also different from adult. Arterio venous malformations are a rare cause of haemorrhagic stroke in children. Clinical features and secerity depends on site of the lesion. They are prone for recurrence and management of deep seated arterio venous malformations is a difficult one even in an experienced hand. We are presenting a rare case of AVM in basal ganglion region presented with recurrent stoke.

Stroke is defined as rapidly developing signs of focal or global disturbance of cerebral function, lasting more than 24 hours with no apparent cause other than vascular origin.1

Strokeis is not common in pediatric age as in adults. The aetiology, clinical presentation and outcome of stroke in children is different from adult.

Arteriovenous malformations (AVM) are a rare cause of haemorrhagic strokein children. We are presenting a rare case of AVM in basal ganglion region presented with recurrent stoke.

A 11-year-old male with normal milestones of development with a significant past history presented to emergency dept. with multiple episodes of tonic -clonic movements involving bilateral upper limb and lower limb associated with uprolling of eyes and frothing from mouth lasted for about 45 minutes. He had headache for three days before the onset seizure. No history of fever, vomiting drug default and trauma. In the emergency room child had ongoing seizure. Later seizure was aborted by multiple antiepileptic drugs.

Child was shifted to PICU. He had postictal drowsiness which lasted for about 3–4 hours. No further episodes of seizures.

On examination (after postictal drowsiness): Child was active and alert with stable vitals. On head to foot examination: Head was normal with normal head circumference .No facial dysmorphism. No neurocutaneous markers.

On examination of nervous system: Higher mental functions – Normal. On cranial nerve examination: Optic Nerve Visual aquity on right side was 6/9 and left side 6/6, Facial nerve – deviation of angle of mouth to left side, flattening of nasolabial fold on right side, little difficulty in blowing out the right cheek, wrinkling of forehead present and no Bells phenomenon. All other cranial nerves within normal limits.

Motor system examination showed mild wasting of right upper and lower limbs. Mild hypertonia on both limbs on right side. A power of Grade 4/5 on rightupper and lower limb, normal power on left side. All deep tendon reflexes were exaggerated on right side with extensor plantar response on right side. Sensory system with in normal limits. No signs of meningeal irritation. No cerebellar signs. Autonomic system within normal limits. Peripheral Nerves – Normal. Gait – normal. Skull and spine – normal. His neurological examination were suggestive of right sided hemiparesis with right UMN facial palsy.

Other systems: within normal limits.

Past history: In 2011, when he was 2 years, he had right sided hemiparesis and right UMN facial palsy. Emergency CT head showed intracerebral hematoma in left capsule ganglionic region with mild surrounding edema.(Figure 1)

MRI showed AVM with nidus 4.8 x 3.7x 3.3 cm in left basal ganglionic region with feeders from left ACA, left MCA, left PCA and draining through ectatic venous pouches into deep venous system. He underwent Gamma knife surgery in 2013.He was put on Phenytion and levetiracetam. He was seizure free for 5 years.

In 2019, (at 10 years of age) he presented with status epilepticus and right sided weakness. His CT showed intraparenchymal haemorrhage in left pareito-occipital region with mass effect.

MRI was repeated and it showed large diffuse plexiform nidus AVM in left gangliocapsular, thalamic and pericallosal region extending into choroidal region (Figure 2). He continued on Phenytoin and Levetiracetam

No other significant past history. He is fully immunized and his growth and development were normal. After stabilization he was investigated this time.

Neurosurgery opinion was made and advised endovascular management and staged procedure with risks of visual deficits, bleeding and weakness. 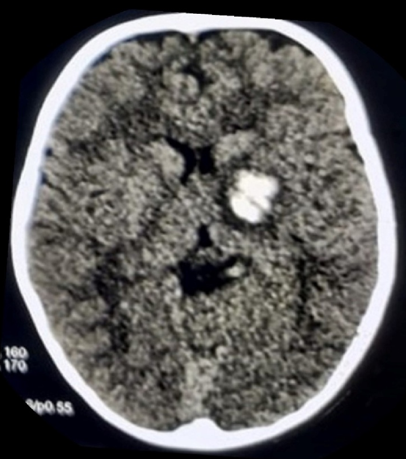 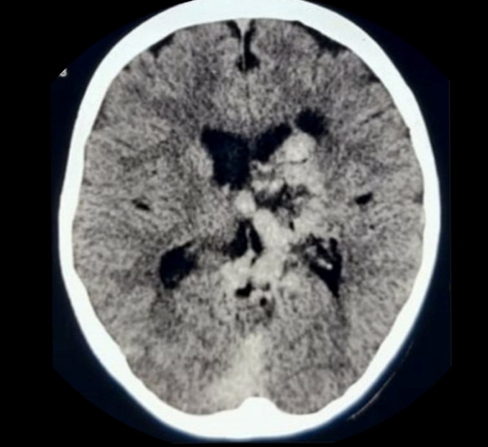 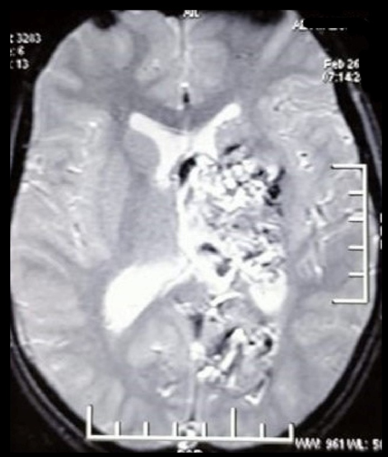 A stroke or cerebral vascular accident (CVA) in children is typically considered to be a rare event. The incidence of combined ischemic and hemorrhagic pediatric stroke ranges from1.2 to13 cases per100,000children below18 years of age.2, 3 Pediatric stroke is likely more common than we realize and is thought to be frequently undiagnosed or misdiagnosed. This may lead to a delay in the diagnosis of stroke. In one report, 19 out of 45 children with a stroke did not receive a correct diagnosis until 15 hours to 3 months after initial presentation.4

In another study there was a delay up to 28 hours in seeking medical attention from the onset of symptoms.5

The reported incidence of pediatric stroke has doubled from prior decade estimates.6 The reason may be mutifactorial like increased survival in children with risk factors for stroke, such as congenital heart disease, sickle cell disease, and leukemia, and increased awareness.6, 7

Stroke is not common in children. Stroke due to AVM is still rare. Broadly there are two types of pediatric stroke-Ischaemic stroke (arterial ischaemic and venous thrombosis - 60%) and haemorrhagic stroke-40%.

Acue isachaemic stroke(AIS) accounts for about half of all strokes in children, in contrast to adults in whom 80–85% of all strokes are ischemic. 2, 8

AIS most often presents as a focal neurologic deﬁcit. Hemiplegia is the most common presentation, occurring in up to 94%ofcases. 2, 9 Hemorrhagic strokes most commonly present as headaches or altered level of consciousness, and are more likely to cause vomiting than in AIS.2, 9

Seizures are common in both ischemic and hemorrhagic strokes. They occur in up to 50% of children with strokes, are not restricted to any age group, and are not limited to any speciﬁc seizure type.10

Clinical presentation of stroke in children may vary with age. The younger the age, more non speciﬁc their symptoms. Perinatal strokes are more likely to initially present with focal seizures or lethargy in the ﬁrst few days after birth. 11, 12 Although focal neurological deﬁcits from these events may not develop until weeks or months later, infants within the ﬁrst year of life can still present acutely with lethargy, apnea spells, or hypotonia. 9, 12

Our child had AVM of the basal ganglia, thalamus, and insula, which is not common in pediatric age group. Usual presentation in 3-4 decades and rarely in children. Brain AVM are comprised of a complex tangle of abnormal blood vessels called the nidus, not clearly artery or vein and lacking a true capillary bed. Feature of AVM is shunting of blood directly from the arterial to venous circulations detected by cerebral angiography. There is usually high flow through the feeding arteries, nidus, and draining veins, which may result in rupture and intracranial hemorrhage, the most severe complication of an AVM.

Children with AVM commonly present with headaches, seizures and focal neurologic deficits. Although patients with AVM rupture and intracranial hemorrhage may have better outcomes than patients with intracerebral hemorrhage from other causes, still AVM repture is associated with significant morbidity and mortality.13 The mortality rate after intracranial hemorrhage from AVM rupture ranges from 12%–66.7%.13, 14 and 23%–40% of survivors have significant disability.15

AVM may be associated with neurocutaneous syndromes such as Osler-Weber-Rendu syndrome (i.e., hereditary hemorrhagic telangiectasia), Sturge-Weber disease, neuroﬁbromatosis, or von Hippel-Lindau syndrome. Moyamoya is another mportant vascular cause of childhood stroke and is associated with conditions such as Down syndrome, neuroﬁbromatosis, and sickle cell disease.16, 17

The management of stroke in children is less-studied and largely extrapolated from the adult. Generalizations and recommendations can still be made based on what is available and consensus statements. The emergency department management of stroke can be categorized into general supportive measures, diagnostic modalities, and treatment appropriate to the type of stroke identiﬁed.

Specific treatment based on carefully weighing the risk of spontaneous hemorrhage in the natural history course against the risk of invasive treatment. AVM are very difficult to treat and considered as inoperable in the past.18 Different modalities of treatment include microsurgical resection, stereotactic radiosurgery and endovascular embolization.19, 20 Multimodal management of AVMs has evolved primarily because no single therapy has been able to effectively obliterate complex AVMs

Stroke is more commonly recognized in children,. It may be ischeamic or haemmorrhgic stroke. BG AVM is arare caus of pediatric stroke. In any child with recurrent stroke deep AVM should keep in mind Modern treatment of deep AVMs includes a multidisciplinary approach utilizing microsurgery, SRS, embolization and observation

G Deveber In pursuit of evidence-based treatments for paediatric stroke: the UK and Chest guidelinesLancet Neurol2005474326