Case Presentation: We describe here a 10-year-old boy who had self inserted a needle into his urethra. Initial attempts to remove the needle from the urethra by inserting a cystoscope failed. The patient presented to our institution with bleeding per urethra with feeding tube insitu per urethra. As already attempted for urethroscopic removal, direct removal of needle done under general aneathesia done.

Conclusion: Per Rectal examination plays an important role and gives adequate information and timely management of the child leads to uneventful hospital stay Psychiatric evaluation is mandatory to detect an underlying mental disorder.

During the past a few decades, reports regarding urinary foreign bodies have increased, including reports of various foreign objects having been inserted into the genitourinary tract. 2 Misdiagnosis may occur when patients conceal FBs insert history, have severe urinary tract infections, or have previous surgery history.

In General Anaesthesia, in lithotomy position and giving pressure on needle per rectally, we could able to appreciate the other end of the needle below the scrotum beside the urethra. Considering the needle direction and characteristics, incision given over the tip of the needle and incision deepend, by giving counter pressure over the needle per rectally. After the needle end protruded through the incision, we retrieved the needle by holding with needle holder.Figure 2 There is no active bleeding per urethra and the incision site. The per uretheral feeding tube removed and a 12F foleys catheter inserted and bladder drained. There is no haematoma formation or any swelling at needle removal site and child was discharged with foleys catheter and advised for followup. Child had the history of delayed mile stone in attaining speech and child is not so active and used to stay alone and not talking with the parents. Hence psychiatric consultation done and appropriate management started. Foleys is insitu for 3 weeks and Retrograde urethrogram was done, which was normal. 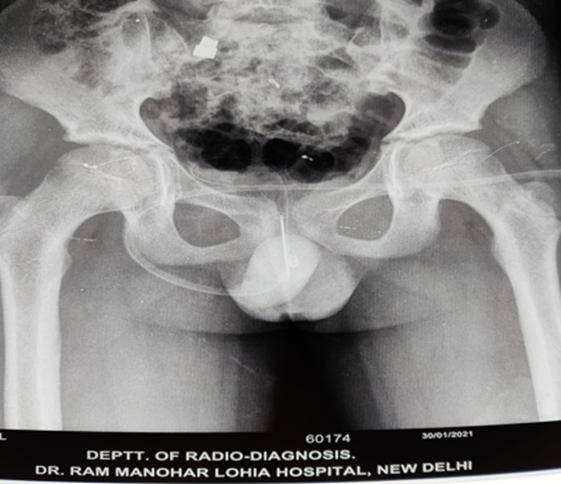 Retrieved needle along with intraop photos. 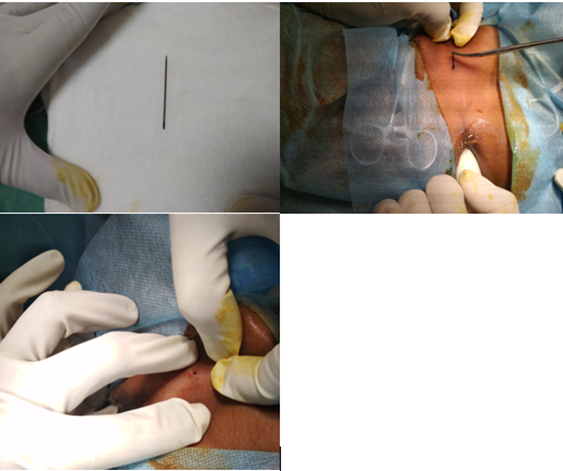 The presence of a foreign body in the genitourinary tract often requires prompt treatment. 3, 4, 5, 6 Definite management of urethral foreign bodies aims at complete removal with minimal complications. 7 The most reasonable method to remove urethral foreign bodies depends on characteristic of the objects, such as shape, size, location, and mobility in the urethra. 5 Various methods of foreign body removal from the urethra have been described, including meatotomy, cystoscopy, internal or external urethrotomy, suprapubic cystostomy, Fogarty catheterization, and injection of solvents or anesthetic gel. 5, 8 When possible, endoscopic and minimal invasive techniques of removal should be used. In one report, an electric wire that was inserted into the urethra was removed by open suprapubic cystostomy. 7 Initial attempts to insert a 22F cystoscope or 8F ureteroscope in parallel with the wire were judged to be impossible due to insufficient space. In another report, however, a urethral telephone cable was removed, with some difficulty under local anesthesia, after using plenty of local anesthetic gel, even though initial attempts in the emergency department had failed. 9 In our case due to the needle position and characteristics on per rectal examination and pressure , needle could be retrieved and followed by foleys insertion. Foreign bodies can be removed by endoscopy or open surgery of the bladder, and urethrotomy under general or regional anesthesia are described. 10 Laparoscopic technique is also used for foreign body removal from bladder, and this technique was found useful in children. 11 We used direct removal under general anesthesia for retrieval of this urethral foreign body and minimizing patient discomfort, fortunately it removed without any gross urethral tissue destruction. Usually stricture may appear as late complication but diverticulum or abscess formation can also occur. Thus the primary risk factor for stricture formation is the mechanism of foreign body insertion into urethra not the removal of it.10 Hence child will be evaluated by RGU for any complication and managed accordingly.

We conclude that Per Rectal examination plays an important role and gives adequate information and timely management of the child leads to uneventful hospital stay. Although foreign bodies in urethra in children are rare, and is considered in children with mental illness defect and with familial inter relation problems. Hence children with doubtful behavior should undergo psychiatric councelling to improve their self-esteem and to get rid of the unnecessary consequences in the family and in society.