A holistic and multidisciplinary approach is required for ovarian cancer diagnosis and management. Ovarian tumor diagnosis is based on clinical symptomatology followed by radiological confirmation. Tumor markers are considered just adjunct. Management of ovarian mass is surgical and intra -op frozen section aids in understanding the nature of the mass but histopathology is definitive. Ovarian torsion affects 2.5 to 7.4% of all ovarian tumors. The present case will highlight the destructive changes brought about by torsion which could ultimately result in missed tissue diagnosis.

The diagnosis of ovarian pathology starts with patient symptomatology, clinical examination and later confirmed by imaging. Ovarian masses above 7 cm even if benign requires surgical intervention due to risk of torsion.1, 2 The exact nature of ovarian pathology is essential for understanding the aggressiveness of the disease pathology. Frozen section done intra-op has a good sensitivity and specificity with the exception of borderline tumors.3 Torsion of ovarian tumors is a known complication of ovarian masses. There may be no histopathological changes resulting from torsion or may result in congestive changes to partial to complete necrosis of the underlying tissue.4 Complete necrosis is rare. With this case report we would highlight the extensive necrosis brought about by torsion of such masses which could ultimately result in a missed diagnosis.

A 26-year-old P2L2 presented to the outpatient department with pain abdomen and inability to pass urine and stool for 1 day. Her obstetrics history revealed that she had two vaginal deliveries, ten and one year back without any complication. On examination her pulse was 90 beat per minute and blood pressure was 90 by 60mm of Hg. She was a febrile and had mild pallor. Per abdominal examination revealed a mass of 28 weeks, solid to cystic in consistency, restricted mobility and was tender on palpation. Cervix was healthy on per speculum examination and per vaginal examination revealed uterus of normal size with mass present in right fornix. Rectal mucosa was free on per rectal examination. Her ultrasonography revealed an ovarian mass of 10 x12x8 cm on right side with septations with hypo and hyper echoic area with probability of benign pathology. MRI with contrast revealed right sided thick-walled cystic lesion 15.6 x 12.5 x 9.2cm in abdominopelvic location? Most likely benign cystadenoma of ovary. Patient admitted given initial resuscitation and catherization done. Her tumor markers values were as follows: CA-125-25, HE4-5.79, CEA-5.33ng/ml, Beta HCG- <1.2mIU/ml and alpha-feto protein -15IU/ml, LDH-544 U/ml which was borderline high. Her investigations revealed Hemoglobin level was 9 gm%, viral markers negative and serum creatinine -0.6 mg%. After 48hrs. of admission and preoperative work up patient was taken for exploratory laparotomy. Abdomen opened by vertical midline incision. On exploration straw colored free peritoneal fluid was found which was sent for culture and cytology. Intraoperative mass of 10 x 12cm found on right side free from underlying tissue. Multiple areas of hemorrhage and necrosis were present. There were three twists present in the ovarian pedicle. The uterus and left adnexa were found normal. Decision for right salpingo-ophorectomy was taken and tissue send for frozen intra-op. The frozen section revealed no evidence of cytological atypia or apparent malignancy. The decision for radical surgery (TAH with BSO with lymph node sampling) was abandoned and abdomen closed. The histopathology of the ovarian tissue was sent. Many sections of the ovarian tissue were taken but no diagnosis could be made due to extensive necrosis. There was no viable ovarian tissue for definite tissue diagnosis. Patient was counselled and discharged. Patient was advised to follow up periodically with repeated ultrasound. 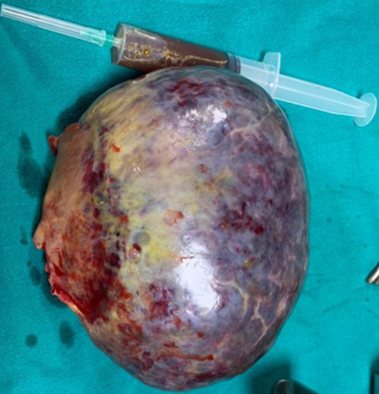 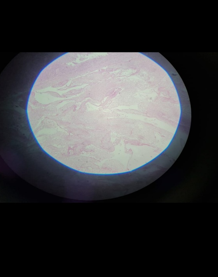 Ovarian torsion has been found with ovarian masses. The risk of ovarian torsion increases if adnexal masses size exceeds 5cm, with pregnancy, ovulation induction, PCOS, tubal ligation and with hypermobility of adnexal structure.5 In present case the massive size itself was a risk factor. Most common presentation is acute pain abdomen followed by nausea and vomiting. Sometimes the atypical presentation like abdominal distension or urinary complaints can pose a difficulty with diagnosis.6 The presentation in this case was with pain abdomen but of low intensity with associated rectal and urinary problems. The patient presented after 24 hours of pain hence the typical acute picture was not encountered. There is no definite blood marker for ovarian torsion but CRP and TLC has been found to be raised. 7 USG color doppler can also detect the decreased blood supply in cases of torsion but still viable tissue has been found in such cases on histopathology. Jee et al proved that ultrasound has a diagnostic accuracy of 87 % in diagnosing torsion and all the patients who showed no flow in tissue pedicle generally had necrotic ovaries on histopathology.8 lt was found that a duration of more than 48 hours is required for necrosis to occur.9 Some have reported this duration to be 36 hours.10 The diagnosis of torsion requires strong clinical suspicion but the definitive diagnosis is intra-operatively. Even the highly necrosed ovaries found intraoperatively have some functional remaining tissue in them.11 Torsion could result no change to coagulative to complete necrosis of the ovarian tissue. The maximum number of twists reported in ovarian masses are six in number. In the present case 3 twists were encountered and Swapna et al in their study have encountered gangrenous tissue was mostly associated with 3 twists. The chances of gangrene did not increase if there were more twists encountered in their study.12 Mostly benign tumors have been encountered with torsion but torsion with malignant tumors have been found in 2% of cases.13 Frozen sections done intra-operatively aid in the diagnosis but its sensitivity becomes less for large and borderline tumors.14 The sensitivity of frozen section ranges from 92% to 97.98%. Disparity between frozen and actual histopathology can arise due to sampling error, type of freezing used, type of specimen received, type of procedure adopted and focal nature of the lesion.14 Due to limitation of frozen section histo-pathology of the ovarian tissue is needed for definitive diagnosis. Torsion resulting in gangrenous ovary are rare but if present result in missed diagnosis. The missed tissue diagnosis becomes a histopathological challenge and the follow up of such patients is difficult. There are no guidelines and parameters as to how to follow such patients for diagnosis and rule out recurrence of malignancy.

Tissue diagnosis is of utmost importance for determining the pathology of ovarian masses. Malignancy has to be ruled out. Torsion if occurs with ovarian mass could result in massive necrosis which would hinder tissue diagnosis hence if patient presents with pain in the ovarian lump, then torsion could be one super added complication specially so if size of these masses is more than 5 cm hence prompt decision for surgery should be taken so as to prevent untoward complication of gangrenous ovaries.