Synovial sarcoma is a malignant mesenchymal tumour which mostly affects young adults and is mostly seen in extremities. Primary synovial sarcoma arising from the lung is rare, accounting for less than 0.5% of all lung carcinomas. Most commonly it arises from the lung followed by pleura and mediastinum. Primary pulmonary synovial sarcoma is an extremely aggressive malignant tumour that can invade adjacent organs and give distant metastasis. Histologically it is of two main types – monophasic and biphasic. IHC is a must for diagnosis following clinical examination and imaging. Here we report a case of an elderly male with right lung mass lesion infiltrating the visceral and mediastinal pleura. PET – computerized tomography (CT) guided biopsy was s/o synovial sarcoma monophasic type which was further confirmed by IHC. The multimodality treated for this includes wide resection, chemotherapy and radiotherapy. Synovial sarcoma is relatively chemosensitive though it is considered as a high grade tumour with a poor prognosis. Because of the advanced stage of the disease our patient was not a candidate for surgery and was taken up for chemotherapy. He had a survival of 6 months but had succumbed due to non – cancer related cause.

Synovial sarcoma (SS) is a malignant mesenchymal tumour which accounts for 5- 10% of all soft tissue sarcomas mostly affecting young adults between 20 -40 years of age and is mostly seen in extremities.1 <10 % of synovial sarcomas arise from thorax and abdominal wall or intrathoracic site. Primary synovial sarcoma arising from the lung is extremely rare, accounting for 0.3% to 1.3% of all primary lung carcinomas. Primary pulmonary synovial sarcoma (PPSS) is an extremely aggressive malignant tumour that can invade adjacent organs and give distant metastasis.2 Here we describe a rare case of PPSS in a 50 year old man with special emphasis on its aggressive nature.

A 50 year old male farmer presented with shortness of breath, right sided chest pain, dull aching in nature and dry cough since 8 months. The severity of shortness of breath and cough was increasing gradually. The patient was a chronic smoker (10 -15 bidis/day for 15 years). 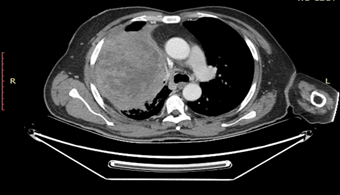 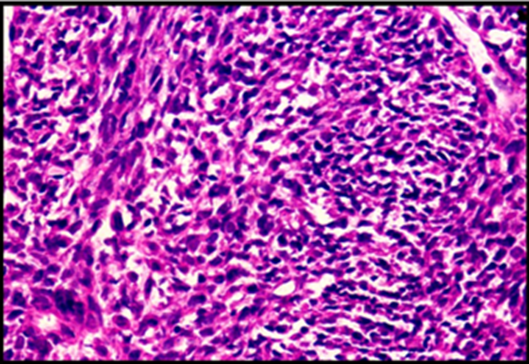 Respiratory system examination showed left side tracheal shift with right side dull note and reduced breath sounds. Chest X -ray revealed a right side homogenous opacity. PET- CT was done which revealed a locally advanced lesion in right upper lobe involving the middle lobe (15x10.5x15 cm3) of standardized uptake value( SUVmax) 10.36 along with regional lymphadenopathy.[Figure 1] No other lesion was found anywhere else. CT guided biopsy of this lesion revealed multiple linear cores with diffuse infiltration of sheets of monomorphic elongated spindle cells. Immunohistochemistry (IHC) was done which was positive for vimentin, TLE- 1, CD- 99, BCL-2 and negative for pan-CK , SMA, desmin,CD-34, S- 100,TTF-1 .Ki- 67 was 30% leading to final diagnosis of right sided primary pulmonary monophasic synovial sarcoma. As the patient was of advanced age with comorbidities and a Karnofsky performance status(KPS) of 80 with a surgically inoperable locally advanced lesion he was started on multiagent chemotherapy with CYVADIC regimen, completed 4 cycles with the same and as disease was found progressive he was shifted to chemotherapy with docetaxel and gemcitabine. He had completed 2 cycles with the same regimen and had stable disease with survival of 6 months but had succumbed due to non- cancer related cause.

PPSS is an extremely rare intrathoracic tumour affecting young adults, no sexual bias with a characteristic IHC and a distinct chromosomal translocation. They are high grade in nature with overall 5 year survival rate 30 %. Two main histological types of PPSS – monophasic and biphasic, majority being monophasic. Imaging is usually non- specific. IHC is needed to reach a final diagnosis. Bcl–2 positivity help us in the diagnosis of synovial sarcoma. Diagnostic specificity is increased by cytogenetic testing but it is not essential. Reciprocal translocation (X;18) (p 11.2;q11.2) is seen in PPSS.1 Surgical resection with clear margins is the main modality of treatment for intrathoracic SS if feasible. For locally advanced disease, systemic treatment is the only therapeutic option available. Ifosfamide based regimen is the standard in young patients with good performance score and in extremity soft tissue sarcomas but given the poor prognosis and risk for visceral crisis associated with non- extremity soft tissue sarcomas and in elderly patients with a poor performance score with multiple co-morbidities a combination chemotherapy with CYVADIC, MAID etc. regimens is desired. Newer therapies targeting fusion oncogene, SS18- SSX derived peptide vaccine, EGFR, VEGF are the future options in synovial sarcoma.1, 2

Primary pulmonary synovial sarcoma is a rare aggressive malignancy presenting in young adults. a meticulous work up is needed in such a case for early diagnosis and treatment. Newer therapies targeting the genes involved are a new area of research.